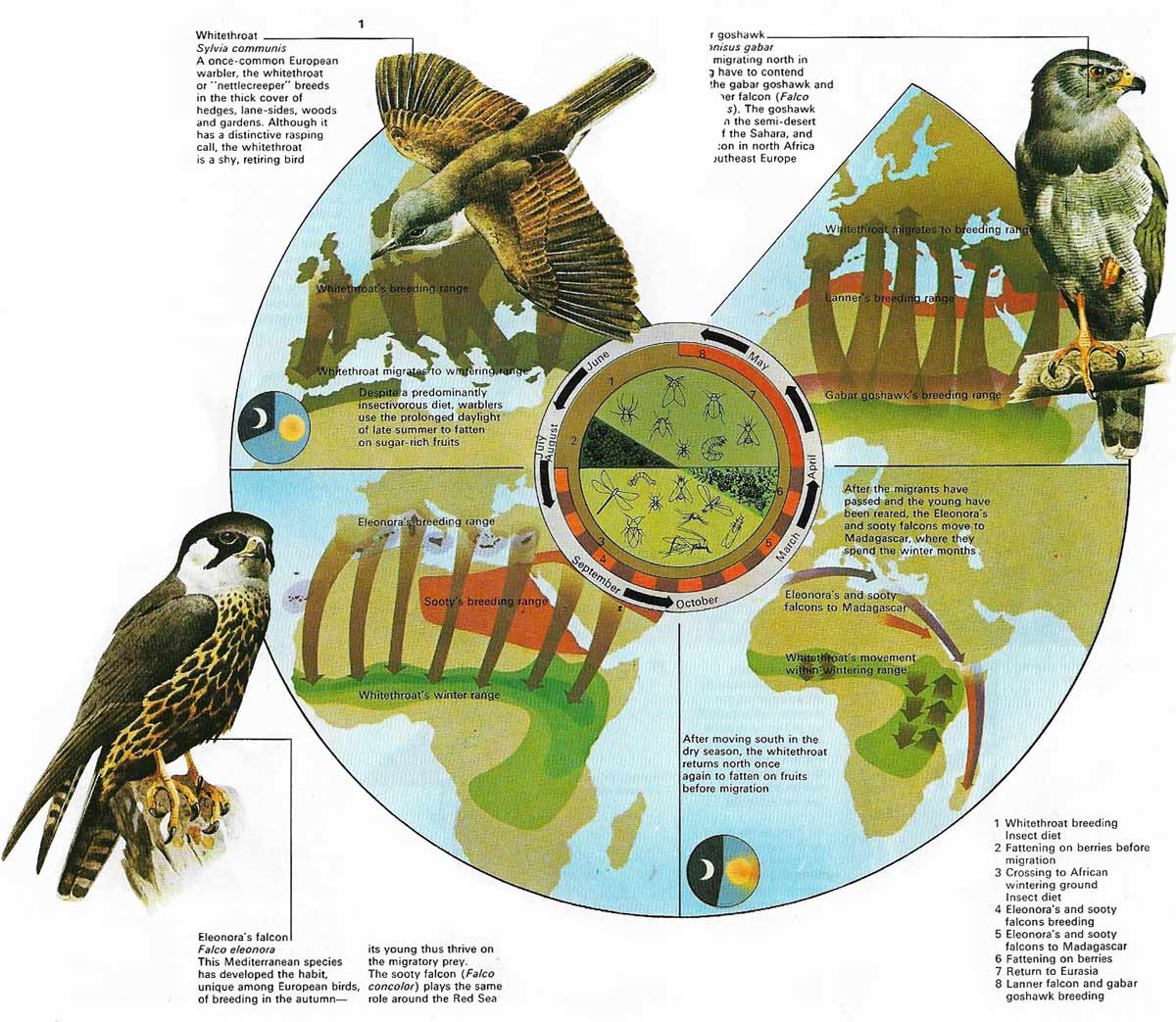 The year-by-year migration of songbirds, waders and waterfowl from their breeding areas in Europe and Asia to winter quarters in Africa provides birds of prey with an abundant seasonal food supply. Every year, 5,000 million or more birds fly the 2,000 miles south to the grasslands, forests, and lakes of central and Southern Africa. A third of these birds may die before their return in the spring, succumbing to the rigors of climate and geography, dying of exhaustion, or being taken by birds of prey waiting or travelling along the migration routes. The falcons and hawks are major predators in this food web, and the whitethroat is a typical prey species. 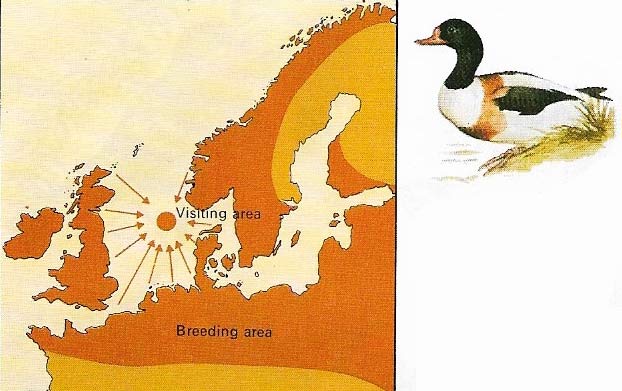 Fig 2. The European populations of the white stork (Ciconia ciconia) winter largely in the steppes and deserts of Southern Africa. Flying via land masses they avoid long sea crossings with poor soaring conditions. 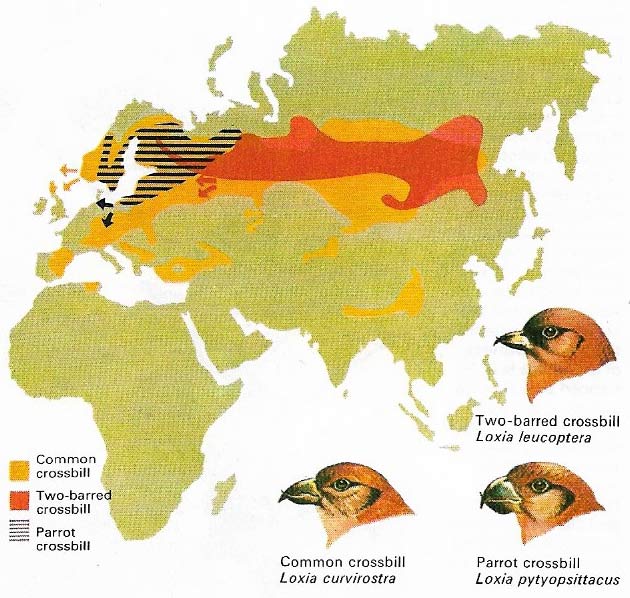 Fig 3. Irruptions are special "migratory" movements which occur irregularly in a few species as a response to unusual food conditions. The crossbills of Eurasia, for example, may leave their normal breeding areas in large numbers, moving south and west to exploit exceptional crops of their main food, conifer seeds. The parrot crossbill, the heaviest-billed, specializes in tough pine cones, while the common crossbill has an intermediate bill and prefers spruce. The two-barred species, which has the lightest bill, is restricted to larch cones. These species do not usually set up new, long-term viable populations. 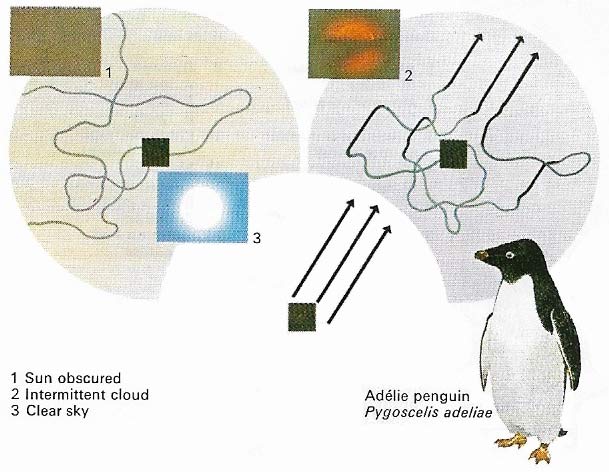 Fig 4. The penguins navigate by sky-signs just as flying birds do. Faced with a return journey to the breeding grounds of up to 200 miles across snow and ice, Adélie penguins (Pygoscelis adeliae) use the Sun to aid their spot-on homing navigation. This was conclusively proven when birds were taken hundreds of miles from home and released on featureless terrain. With the Sun obscured, the navigation of the displaced birds was extremely erratic but with a clear view of the Sun they were well able to orientate themselves accurately. Intermittent cloud gave intermittent results. How the birds compensate for the daily movement of the Sun is as yet unknown. 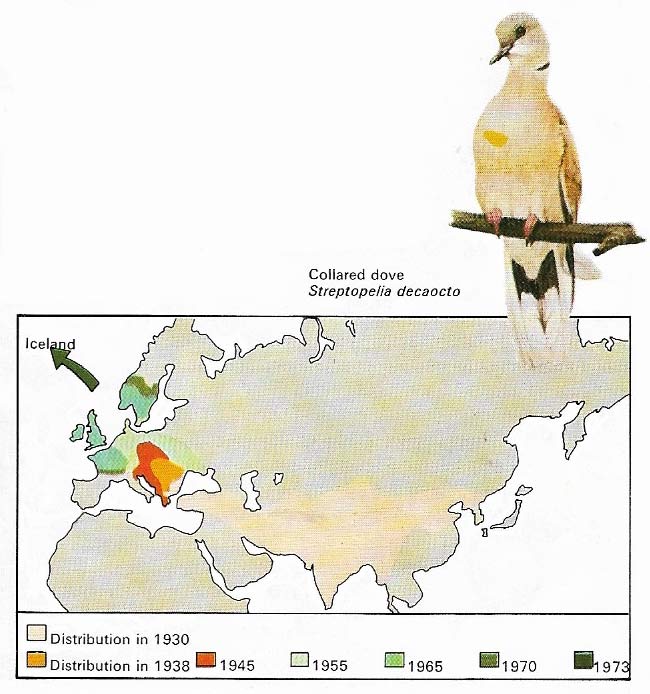 Fig 5. Extensions of range are not examples of true migration. The collared dove spread slowly from Asia early in the twentieth century and had reached Hungary by 1928. Then its rate of progress increased and its range was extended by 1,200 miles in 20 years. It reached Britain in 1955, is still moving westwards and may have bred in Iceland in 1793. This success is due largely to its adaptability: it nests in walls and shrubs as well as trees, raising up to five broods a year and feeding on grain wasted by man. 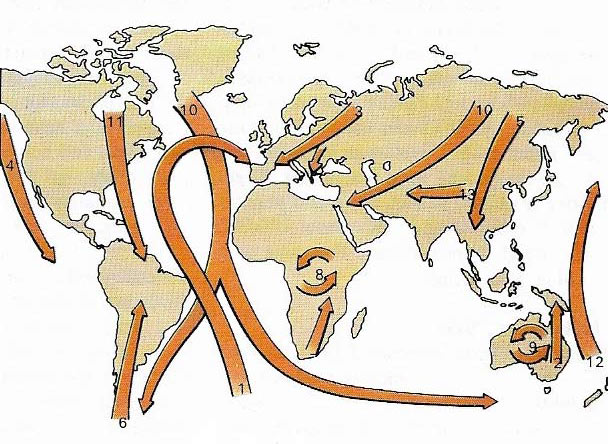 Fig 6. When migrating, many birds travel along fairly well-defined flight paths or fly-ways. These often follow winds or sea currents (1, 2), land contours or coastlines (3, 4). Birds from high latitudes move toward the equator (5, 6, 7) during the winter. Some travel many thousands of miles (10, 11, 12). In Eurasia east-west movements take place (13). On large land masses such as Australia and Africa, fruit-eaters and insectivores follow seasonal food sources (8, 9).

Birds owe much of their success as a group to their unusual powers of migration. The phenomenon of migration, for the scientist bewilderingly complex and for the animal extremely exhausting, is deep-rooted in many species and has undoubtedly exerted great influence on their evolution. The change in residence of migrants parallels changes in appearance, diet, or even the behavior of more sedentary bird species.

True migration involves a regular, seasonal movement between one area, in which the animal breeds, and another, in which the climatic and other conditions are more suitable when the breeding season is over. Thus some birds species, particularly wildfowl and waders, breed in the tundra and migrate to temperate regions for the winter. Others, particularly insectivores of the Northern Hemisphere such as the swallows and warblers, breed in temperate lands and move south to winter in the tropics. In the Southern Hemisphere, the migratory movements are largely in the other direction, although the greater land area in the Northern Hemisphere means that there are more species moving south than north.

Bird migration varies hugely in its scope, as indicated in the illustration at the top of the page. The greatest travellers, particularly the seabirds, may fly almost from pole to pole, and many land birds also make long trans-equatorial migrations. At the other extreme, some species may move only from an inland breeding area to the coast or from mountain breeding areas to winter quarters in the valleys. Seabird colonies provide a vivid example of local movement, with vast numbers of breeding birds moving from their coastal nest sites to a much wider dispersal area over the open sea.

Not all bird species show the consistent, cohesive movements that characterize the true migrants. These "partial migrants" are species in which not all individuals behave uniformly; some may go on a post-breeding migration, others may not. In Britain, the song thrush (Turdus pholomelos) and the lapwing (Vanellus vanellus) show this inconsistent behavior, which may provide a clue to some of the selection pressures involved in the evolution of migration. These species may be at the edge of their "comfortable" winter range, and some individuals will be poorly adapted to local conditions. These birds will tend to move out for the winter.

Migration does not, strictly speaking, include movements such as irruptions (Fig 3), or extensions of range, even though birds often travel greater distances in the process. Extensions of range are largely the result of a preferred food source becoming available over a wider area. A most impressive extension of range has been seen in the collared dove (Fig 5) and the fulmar petrel (Fulmarus glacialis) of the eastern Atlantic. In recent decades the fulmar has progressively colonized Britain from the northern islands, and in the last 100 years has increased its population five-fold.


The origins and mechanics of migration

The evolutionary origin of migration is extremely complex and as yet incompletely understood. The phenomenon is undoubtedly related to the necessity of finding appropriate food and weather for the raising of a brood. The migratory instinct has probably been developing over a period of 40 to 50 million years and, though greatly influenced by the Pleistocene glaciations, did not originate with them. Migratory movements are governed by inherited factors but initiated and guided by environmental influences. Individuals of a migratory species will thus show "migratory restlessness" at the onset of the migration period, even though there is usually no external indication that the season is changing. However, the weather may then delay or accelerate departure and to some extent modify the route taken. Despite occasional deviations, when birds get lost or blown off course, the direction of migration remains remarkably constant.

The physiological mechanisms behind these great powers of navigation and orientation are still a mystery. If the means by which migrating birds compute their bearings is unclear, it is well established that they use landmarks when convenient and sky-signs, almost certainly both the Sun and the stars. Recent studies prove that Adélie penguins navigate by the Sun (Fig 4). Nevertheless, the birds apparently follow a magnetic bearing rather than a bearing to a particular point on the Earth's surface.

The habits of certain species show that they have an innate knowledge of the migratory route. The young of these species depart in autumn before or after their parents. Individual adult birds displaced laterally by humans while on migration will resume their flight on release on exactly the same magnetic bearing, finishing up with the same lateral displacement from their destination. On the other hand, some birds can navigate back home after an unusual displacement. One famous example of the innate migratory urge is that of a Manx shearwater (Puffinus puffinus) that was taken by plane to Boston, Massachusetts, from its burrow on Skokholm Island, South Wales. It was back on its nest 12.5 days after release in America – ten hours before the mail arrived giving details of its release. How the bird managed to find its way over this distance, with no landmarks to guide it, and in such a short time remains a mystery.