The wing movements of the mallard (Anas platyrhynchos) show something of the intricacies of flapping flight. The upper arm acts as an airfoil as in gliding flight. The main thrust is developed by the wing tip which moves much faster than the rest of the wing structure. 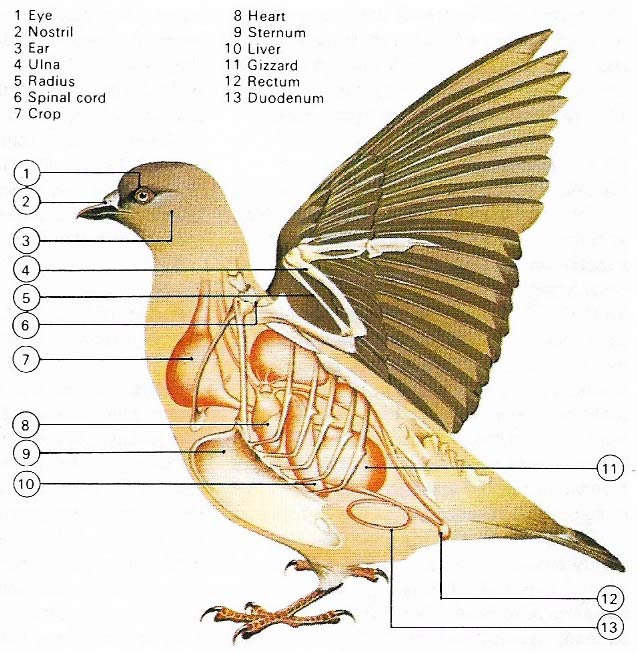 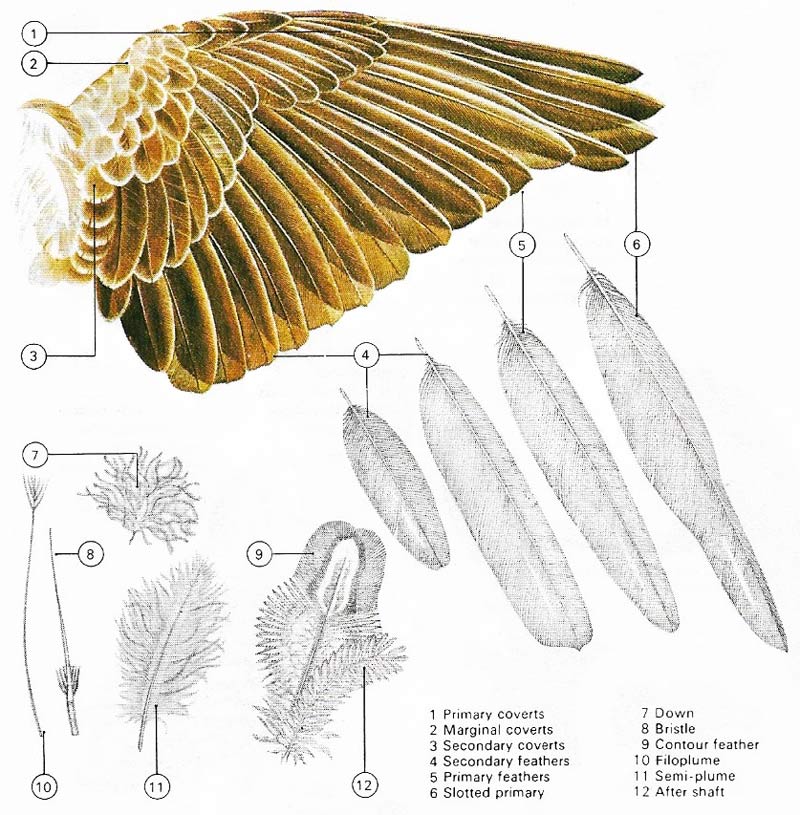 Fig 2. Feathers are an adaptable covering. They can be strong plumes for wings and tail, coverts and contour feathers for maintaining an unbroken streamlined surface, and down feathers for insulation. The feathers overlap better than tiles on a roof for they maintain their continuity and connections in spite of considerable changes in shape in the underlying super-structure, such as wing and shoulder joints. 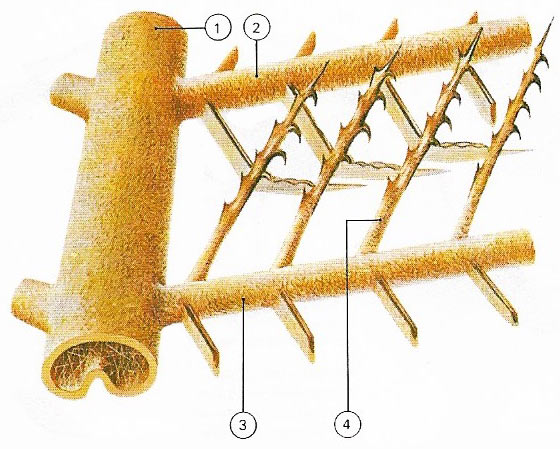 Fig 3. The detailed structure of feathers, more than anything else, makes birds supreme aviators. Each of the surface feathers has hundreds of barbs (2, 3) extending in one plane from the central midrib or rachis (1) to form the feather vane. Lying in the same plane, barbules (4) project from the barbs on both sides. The barbules on the side of the barb away from the bird's body bear hooks which catch on the unhooked barbules of the next barb. A single flight feather, of a large bird, may carry as many a 1.5 million barbules to maintain its shape. 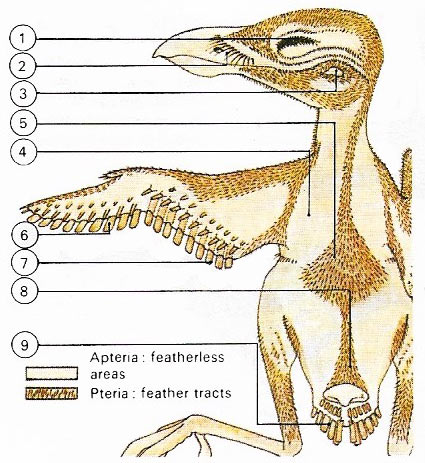 Fig 4. The plumes, coverts, and contour feathers of most birds grow from the skin in definite tracts. The feathers grow from papillae ("goose pimples") which produce one or two sets of feathers a year, replacing old ones and also allowing for changes in color. 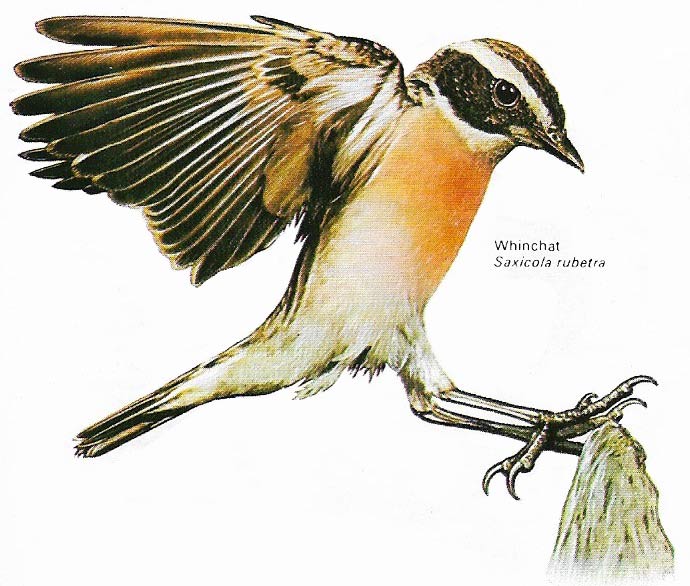 Fig 5. On landing, a bird reduces its speed. This is usually achieved by swinging the body into an upright position with its tail spread and its wings beating against the direction of flight. 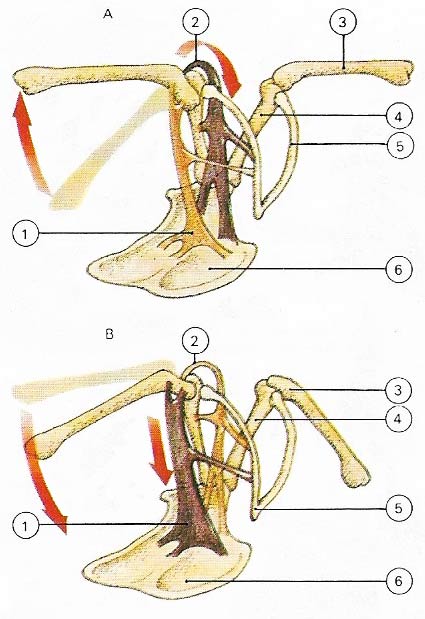 Fig 6. The flight muscles (pectoral is overlying supracoracoideus) (1) are attached to a large-keeled sternum (6) and a pair of struts, the coracoids (4), between the sternum and the shoulder joint. This includes part of the wishbone (fused clavicles) (5) and the scapulae (shoulder blades). The joint forms a pulley through which the tendon of the supracoracoideus (2) passes to be inserted on top of the humerus (3). Therefore the wing is pulled up when the supracoracoideus contracts (A) and down when the pectoralis contracts (B). 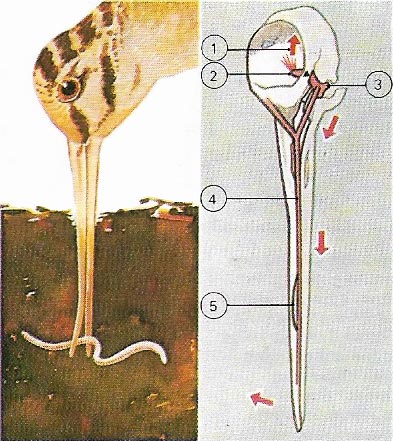 Fig 7. Most manipulations are preformed by the bill. The woodcock (Scolopax rusticola) shows how complex such procedures can be when it plunges its bill deep into mud to take a worm. When it has reached its prey, the bill tip is opened by the quadrate bones (2) rocking forwards in their seating (3) when muscles (1) contract. This pushes forwards on the jugal bones (4), these in turn push the top of the upper beak open beyond a thin, hinge-like area (5). 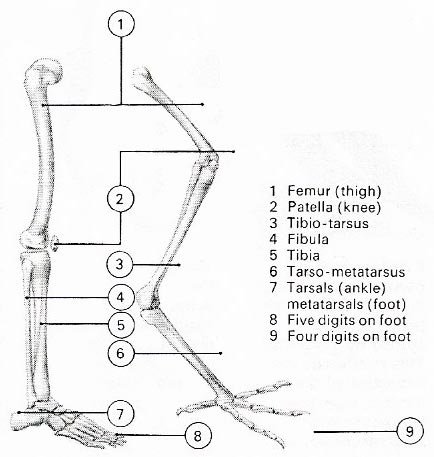 Fig 8. The bird's leg is basically similar to that of a human, but there is much fusion of the bones of the lower leg and ankle.

Birds are the only group of vertebrate animals, apart from bats, that are capable of true flight, as distinct from mere gliding, and their bodies are designed to make this possible. Though they are masters of the air they are also quite at home on land or in the water, and some – certain ducks, for example – are efficient in all three.

The development of feathers has been crucial to this success. Feathers undoubtedly came before flight. They were evolved, like fur, for insulating a warm-blooded body and were only later developed and used as airfoils. Birds were probably feathered for millions of years before they flew.

The adaptations of a bird for flight involve all of the principal structural and behavioral features of the animal. The structural changes are centered upon the development of strength and lightness. Therefore the bones are hollowed or honeycombed, or molded into thin, curved plates in such a manner that they are quite strong enough for the jobs they have to perform. The light beak takes the place of heavy teeth and the feather covering is very light – even though it may weigh more than the skeleton. A series of air sacs in the body cavity, connected with the lungs, assist in respiration.

The rearrangement of bones deal with the mechanical stresses in an animal that walks on its hind legs and flies with its front ones is seen principally in the pectoral (shoulder) and pelvic (hip) regions. The pectoral girdle is firmly attached to the breastbone so that the body is efficiently suspended from the wings in flight (Fig 6). This is brought about by an extra development of the coracoid bones, which are absent in mammals. Similarly, the pelvic girdle is so strengthened and arranged that the hind legs can efficiently carry the bird's weight on the ground – or when it is climbing, perched, or in the water – and especially they can act as shock-absorbers on landing. Because bones are so delicate, they have been strengthened by means of fusion. As in mammals, the three bones of the pelvic girdle on each side are fused together and to the backbone. There has also been a fusion of vertebrae in the spine, from the last thoracic (chest) one through all the lumbar and sacrals to the first few caudal (tail) vertebrae. These fused vertebrae form the synsacrum, which supports the pelvic girdle and lets the legs and wings function efficiently without impairing the other body functions.

The limb skeleton of birds is also much modified from the basic vertebrae arrangement. The bones of the lower leg and the tarsal bones of the foot have become elongated and fused to provide an extra joint in the limb (Fig 8). The thigh bone of birds is usually concealed in the body wall and feathers. A most unusual feature of this limb is the mechanism for ensuring a good perching grip. The toe flexor muscles originate above the knee. Their tendons pass in front of the knee, behind the ankle and beneath the toes. When a bird's leg is flexed (bent), as when perched, this arrangement ensures that the toes are pulled in and grasp tightly even during sleep.

In the forelimb the "hand" is much reduced, the few remaining bones being largely fused to form an attachment for the primary flight feathers. The first remaining digit forms a support for the bastard wing which acts as a slot to prevent stalling at low flight speeds. The secondary flight feathers are attached to the ulna in the forearm. Together with the remarkable structure of feathers (Fig 2, 3), this results in a wing of extreme efficiency and adaptability.

The flight feathers of the wing (remiges) and those of the tail (rectrices) provide lift and guidance in flight, but their aerodynamic properties are not fully understood. In normal flapping flight the wing is beaten strongly downward and forward and then more quickly upward and backward. On the down stroke the wing has such a high angle of attack that it would stall if the primary feathers did not act as individual adaptable airfoils to prevent this. Each feather twists up and back along its length so that the total resultant thrust is strongly forward, the separation of the feather tips assisting this. Also, at a certain angle of attack, the bastard wing or alula lifts forwards from the front of the wing creating a "slot" to cut down turbulence over the airfoil and reduce the risk of the wing stalling.

Birds capable of flying slowly have particularly well-developed wing slots (large spaces between the primary feathers); for example, those of the golden eagle (Aquila chrysaetos) may take up as much as 40 percent of the total wing area when in use. In vultures the tail area is particularly large and helps provide lift during flight.

At the other extreme from eagles and vultures, seabirds such as the albatrosses have long, thin wings. These birds rarely flap their wings but soar in the wind, principally by gliding and accelerating downwind and then turning and climbing sharply upwind until they almost stall. Their flight is so specialized that on still days albatrosses are "grounded".

The specialized wings of hummingbirds, in which flight feathers are primary only, may beat up to 50 times a second or more while the bird is hovering, the stroke being horizontal and powered in both forward and backward directions.