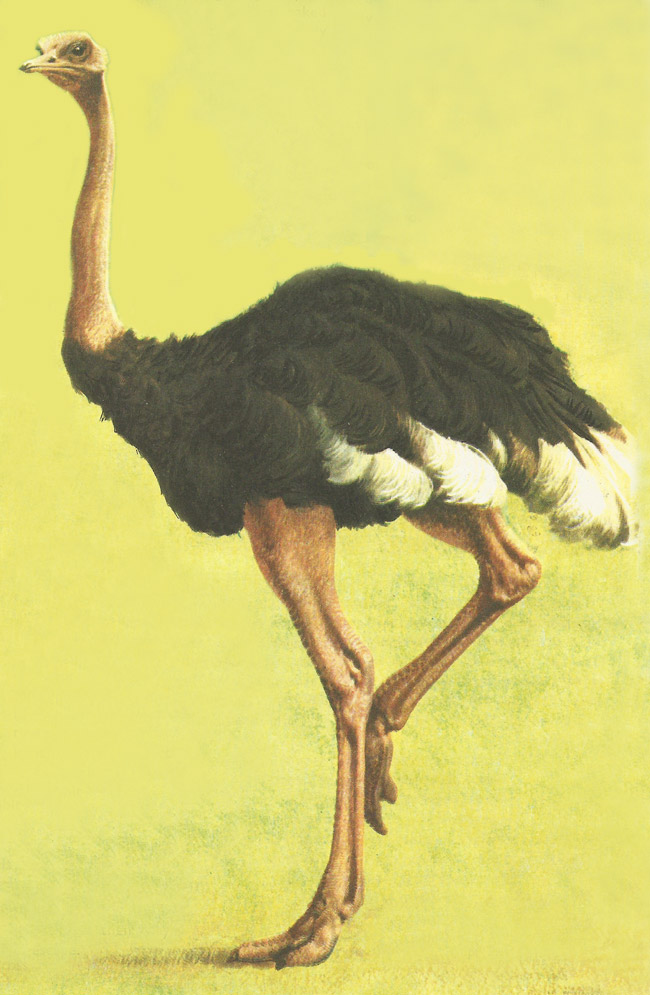 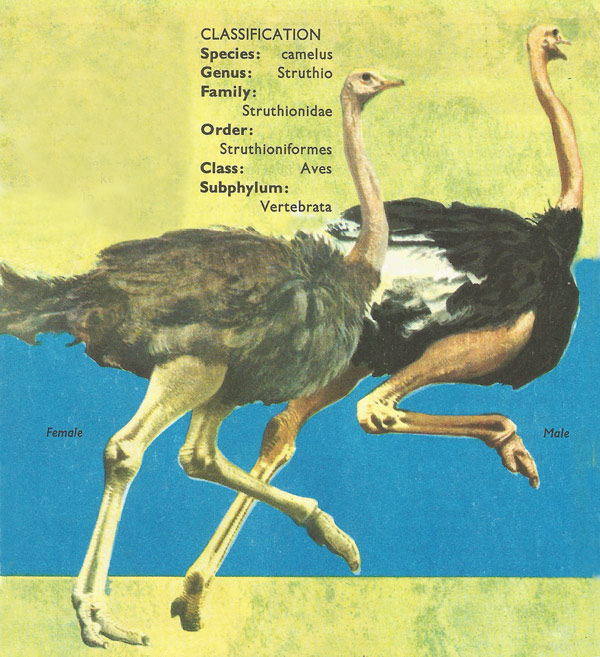 There are two legends about the ostrich, one of which has some slight foundation in fact, the other none at all. The first of these is that the ostrich can digest anything, Many birds are attracted by bright, shining object; magpies and jackdaws are among them and so is the ostrich. Since its beak and throat are very large if frequently swallows articles such as coins, keys rings, buttons, etc. But the bird does not digest these things; if they are small they may do no harm, but too large or too numerous items of this sort are likely to make the bird sick or kill it.

The other story, in which there is no truth at all, is that the ostrich buries its head in the sand when threatened. It is possible that this legend arose from the position which the bird adopts when on its nest. when it lies with its head and neck stretched out in front of it.

The ostrich is the largest bird alive in the world today, though still larger species, such as the moas of New Zealand, have become extinct in historical times. It is unable to fly and differs from all other birds in having only two toes on each foot, one much larger than the other. The foot of an ostrich can almost be regarded as a hoof, and has been developed for running, just like the hooves of the ungulate mammals.

The ostrich is closely related to the rheas of South America, and (less closely) to the emus and cassowaries of the Australian region.

Only the body of the ostrich is covered with feathers; its head, neck,and legs, right up to the thighs, are naked or, at most, slightly hairy. Its head is small and flat, and armed with a broad, very strong beak. Its wings are small and have no stiff feathers, unlike those of other birds.

It relies mainly on its sense of sight, and its eyes are large.

The male is considerably larger than the female. Its back is nearly 5 feet off the ground and it weighs over 300 lb. Its head may be over 7 ft from the ground. Male ostriches have black plumage on their bodies, and pure white feathers on their wings and tails. The plumage of females is greyish brown.

Its legs are long and exceedingly strong; its large two-toed feet are well adapted for swift running in open country. An ostrich can run 40 mph, and its strides are sometimes 15 feet long. It is a curious fact that ostriches have the habit of running not in a straight line but in a great circle. For this reason men hunting them on horseback can often get a shot at them by cutting across their way of escape.

Ostriches live in open savannah country, avoiding forest. Outside breeding season they run in groups of about 20, often in company with zebras, antelopes, and other large mammals. The keen eyes of the ostrich are 7 ft from the ground and can often detect danger at a distance, and the animals are quick to recognise the ostriches' alarm. The birds probably gain some benefit by catching small creatures disturbed by the mammals' trampling feet. Ostriches live largely on seeds and fruits, but will eat insects, reptiles,and other small animals when they can catch them. They can go without water for days at a time, but drink deeply when it is available, and are also fond of bathing.

In the breeding season they separate into groups consisting of three or four females and a male. The male scrapes a shallow hole in the ground and in this the hens lay their eggs until there are about 20 eggs in the nest. At night the male sits on the eggs, but by day they are either covered with sand and left to the warmth of the sun or, in cool weather, are incubated by the females. It is an interesting fact that the hen bird, who is well camouflaged by her grey-brown plumage, undertakes all the daytime incubation; the male would be very conspicuous by day. The chicks hatch after about six weeks and are carefully guarded by their parents until they are fully grown.

Ostriches once ranged over much of Asia and survived until recently in Syria and Arabia. Now they are found in the wild state only on the continent of Africa, living in dry grassland and semi-desert.

All ostriches are placed in one species, Struthio camelus, but there are various sub-species. These can be distinguished from each other chiefly by the color of the naked skin of their heads and necks, which is bluish grey in the Somali ostrich, and reddish in the Sahara ostrich.