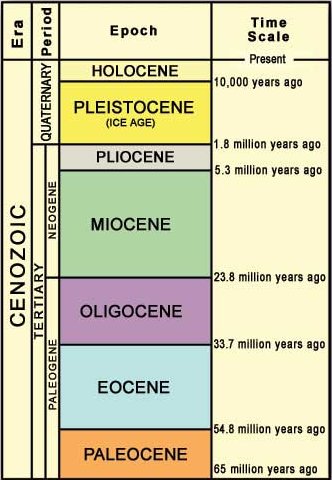 The Cenozoic era is the most recent of the four major eras of geological time, dating from about 65 million years ago to the present. It is divided into five epochs, starting with the Paleocene, followed by the Eocene, Oligocene, Miocene, Pliocene, Pleistocene, and Holocene.

The Cenozoic began as the last dinosaurs became extinct, at the end of the Mesozoic era, and is the era in which the mammals flourished. Most of the placental mammals and all of the primates evolved during the Cenozoic era. The early part of the Cenozoic was marked by great mountain-building activity (Rockies, Andes, Alps, and Himalayas).

Traditionally, the Cenozoic was divided into two very unequal periods: the Tertiary (which made up the bulk of the Cenozoic), and the Quaternary, which is the last one and a half million years or so.