Fig 1. A family tree of primates shows that the earliest members of the group were closely related to the insectivores, as are today's tree shrews. In the Eocene period (55 to 36 million yr ago), lemurs flourished in many parts of the world although today they are found only in Madagascar and the nearby Comoro Islands. Both the New World and the Old World monkeys probably evolved from tarsier-like ancestors during the Oligocene period (about 27 million yr ago). The first true apes appear later in the Miocene. These forest-dwelling apes gave rise to man's immediate ancestors. 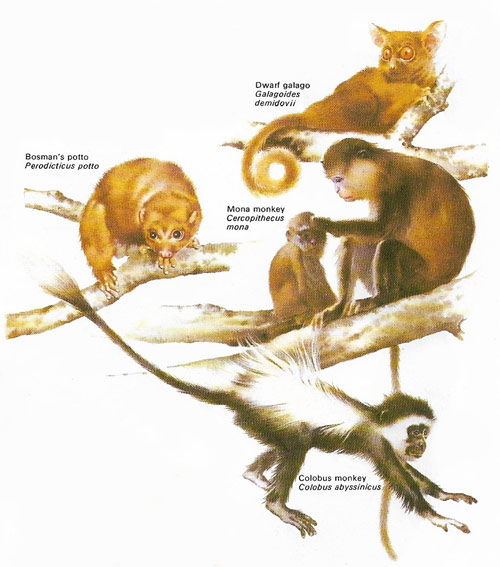 Fig 2. Lower and higher forms of primates are found in tropical Africa. Bosman's potto is a primitive primate, slow-moving and nocturnal, that clings tightly to tree branches. The related dwarf galago spends much of its time on the ground but can leap out of danger with great agility. Most female primates establish close, long-term bonds with their young, as shown by mona monkeys. The colobus monkey, like other African forest species, has decorative fur, for which it has been hunted to near extinction.

A primate is a mammal that belongs to the order Primates. Included in this order are prosimians, monkeys (Old World and New World), and apes, the latter group including hominids. There are approximately 350 extant species of primate.

Primates are characterized by:

Primates are by and large an arboreal order whose members usually climb by grasping. The skull has a bar, which makes a posterior or lateral margin of the orbit. The shortened face is accompanied by a diminished sense of smell. However, tree-life has led to the development of excellent eyesight, typically with binocular vision.

The first primates appeared at the beginning of the Eocene (55–36 million yr ago). There were two varieties of Eocene primates, similar to modern lemurs and tarsiers. The first apes appeared in the Oligocene (about 27 million yr ago) and the first hominids (human-like) primates 5 to 4 million years ago (Fig 1).

The tree shrews (Tupaiidae) of southeast Asia are thought to represent an early stage of primate development. They can be regarded as living fossils. Indeed, some authorities prefer to exclude them from the primates proper and group them with insectivores or to place them in their own separate order. They are active, squirrel-like animals with long tails, pointed faces, large eyes and small, human-like ears. As they climb in search of food – mainly insects – they grasp the branches with their clawed fingers and toes. The grasping ability is amplified in all other primates. It enables them to make more use of small branches than the purely clawed species can and, when at rest, to hold and handle food and other objects.

The prosimians of Africa and Asia are an array of species, including the lemurs (Lemuridae) from Madagascar. Many have hands and feet with apposable thumbs and great toes (that is, the first digit can be rotated and crossed over the palm of the hand or ball of the foot). These creatures can hold firmly on to whatever they grasp and their handling power is enhanced by the development, on most toes, of flat nails rather than claws. The bush babies and lorises (Lorisidae), although retaining the dog-like naked nose of the lower primates, have large eyes and a short snout which makes them look more human than their close relatives, at least facially.

The tarsier (Tarsiidae), similar in many respects to the other prosimians, has an even more human-looking face. Its huge eyes look directly forward and the face has shrunk beneath them, enabling the animal to achieve a high degree of stereoscopic vision. This is a necessity (as is its foot structure) if the tarsier is to leap about in its forest home. It needs to be able to judge distances, like other primates, with accuracy. This comes with eyes that look forward rather than to the side. With the shortening of the face there is a tendency for the sense of smell to become less acute. The face is similar to that of the higher primates rather than the dog-like face of the lemurs. The tarsier's brain is larger and more complex than that of its near relatives.

Animals belonging to the highest group of primates are called anthropoids (Anthropoidea). They include monkeys, apes, and humans. Compared with prosimian primates, anthropoids have flatter, more human-like faces, have bigger brains, and a larger in overall size. Many lead complex social lives in which individuals live as families and the young are cared for over a long period. Communication among these primates is also highly developed.

Most of the more advanced primate species live in troops with a clearly defined role structure, the dominant males (usually the older and larger) being allowed first choice of both food and females. By comparison with other groups primates make elaborate use of facial expression, in addition to posture, in order to signal dominance or submission. Aggressive facial expressions often involved bared teeth and other signs that would be recognized as threatening by a human. But the interpretation of specific signals is not always obvious in human terms; for instance, curling of the lip is believed to signal pleasure in gorillas whereas to humans it portrays anger. Roaring and breast-beating, however, are more easily deciphered as hostile although they may also express exuberance and fear. The correct submissive response is to shake the head slowly from side to side, avoiding the gorilla's eyes.

Tests conducted in the wild have provided decisively that chimpanzees habitually use sticks and stones as tools or weapons. The immediate reaction of a troop of savanna chimpanzees confronted with a stuffed leopard was to retreat in fear to a nearby groups of trees. The adults made much noise and then cautiously advanced and began throwing sticks in the direction of the leopard. When it did not move the boldest chimpanzees came closer and began striking it with sticks. After the stuffed head became detached from the body the chimpanzees realized that the leopard was harmless and went over warily to sniff it. Finally they ignored it altogether and wandered off. Baboons show similar behavior in the wild and have been seen trying to frighten a team of researchers by dropping stones on them from a safe distance up their home cliff.

Laboratory experiments with rhesus monkeys have shown they can grasp abstract concepts such as 'oddness'. If given training in a special test apparatus the monkey can learn to select an object because it has a different shape or color from others offered.

A rich source of controversy concerning primate behavior is whether apes are capable of language, the crucial human achievement. American researchers have bypassed the problem of apes' inability to produce human sounds by teaching them sign language as used by the deaf and dumb. Apes taught this language by people fluent in it who were responsible for their day-to-day care as infants (much as human infants are taught to speak by their parents) learned words fast and could use them in an appropriate context.