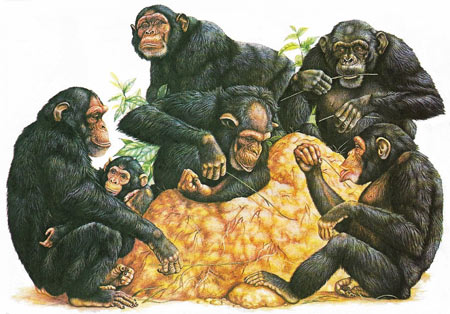 The high intelligence of chimpanzees is demonstrated in their practise of 'fishing' for termites. This involves a sequence of behaviors that is quite complex in logical thought. The first step is for the chimpanzee to find a suitable twig. This is thrust into a hole in a termite mound where the termites will attack the intruding object. The chimpanzee then withdraws the twig, to which a number of termites remain clinging, picks off the insects with its mobile lips and eats them. This sequence of behavior with its regular use of an accessory tool has been observed in wild chimpanzees in many parts of Africa. 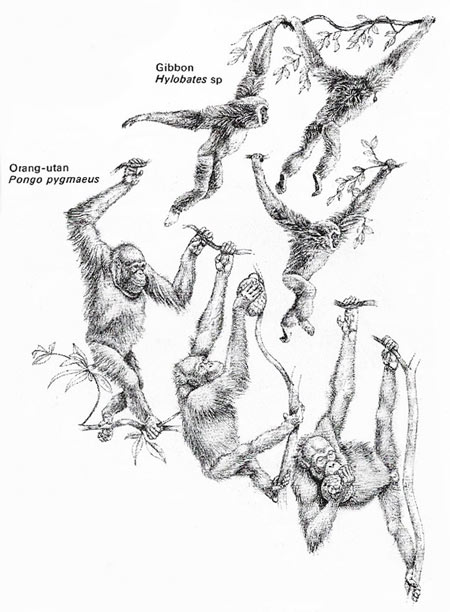 Great apes such as orangutans (family Pongidae) do climb but their movements are slow compared to the agility of gibbons (family Hylobatidae).

An ape is a member of the Hominoidea superfamily of primates. The apes are distinguished from monkeys by their greater size, their bigger and more complex brains, and their complete lack of a visible tail. They includes two families:

1. The family Hylobatidae, with 4 genera and 12 species of gibbons, collectively known as the lesser apes.

2. The family Hominidae consisting of gorillas, chimpanzees, orangutans, and humans, collectively known as the great apes.

The lesser apes, which include the siamangs and the gibbons of southeast Asia are spindly-limbed forest acrobats that can travel at high speed through the tree-tops, leaping and swinging by their arms. The great apes, which include the orangutans, gorillas, and chimpanzees, are all larger and heavier animals. They spend much of their time on the ground, although they retreat to the branches to sleep.

Anthropoid apes are the animals (genus Pan) most closely resembling human beings (genus Homo) and sharing with them a relatively recent common evolutionary ancestor. Together the genera Pan and Homo form the family Hominidae in the suborder Anthropoidea. The apes concerned, the gorilla and chimpanzee, have a higher intelligence than the other primates and greater manual dexterity. The term "anthropoid apes" is often also used to embrace the orangutan (family Pongidae) and gibbon (family Hylobatidae), the other members of the superfamily Hominoidea.

Man's evolutionary relationship with the great apes is particularly close. Apart from man's much larger brain, the main bodily differences are associated with the ape's specialization to a forest life, and man's open country living – walking on hind legs rather than on all fours or swinging from the branches of trees by the forelimbs.