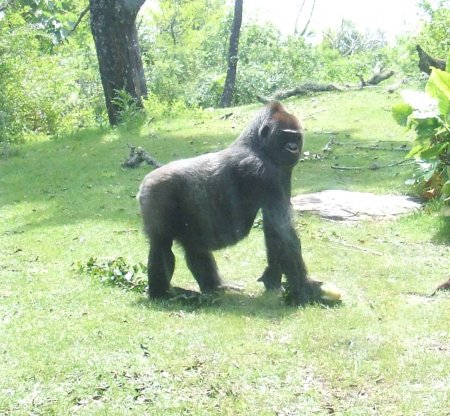 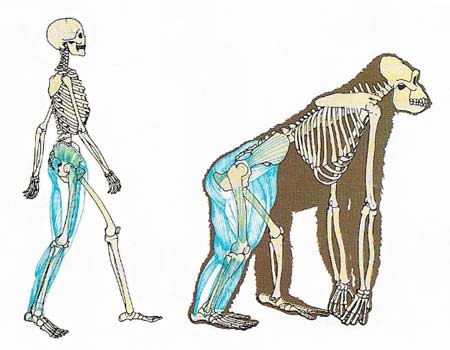 The long pelvis of the gorilla is necessary to accommodate the special muscles needed for quadrupedal walking. The big toe is able to grasp branches and the fingers are curved inwards for knuckle walking. In humans the pelvis short and adapted to a striding gait. The skull, unlike of the gorilla, is balanced on top of the spinal column..

A gorilla is a ground-dwelling herbivore that is the largest living primate. Gorillas live in thickly forested regions of equatorial Africa, principally in the west of the continent. There are two species: the slightly smaller lowland gorilla, and the highland gorilla. As might be expected, the latter has thicker fur for protection against the colder climate of the regions it inhabits. The mountain gorilla was discovered in 1903 by the German explorer Oscar von Beringe, and is called Gorilla beringeri; the lowland form is known as Gorilla gorilla.

Gorillas live in family groups of up to 20 or 30, the young remaining with their parents until they become mature, at about 14 years of age. They sleep in nests or platforms which they make in trees; normally each nest is used for one night only. An adult female will often sleep at the base of a tree in whose branches the younger members of the family lodge for the night. Old males , known as silverbacks, remain mostly on the ground, probably because they are so enormously heavy that they cannot climb with safety. When walking, a gorilla proceeds on all fours, resting on the knuckles of its hands.

Young gorillas will eat insects and birds' eggs in addition to buds and leaves, but the adults are entirely herbivorous.

Comparison of the skeleton of a gorilla with that of an adult human gives a good indication of the gorilla's very broad shoulders and torso, and long, powerful arms. The legs are shorter, in proportion to the trunk, than those of a human. The skull is not smooth and round but has strong ridges of bone for the attachment of the big jaw muscles. The teeth are large and strong, and the canines project beyond the others.