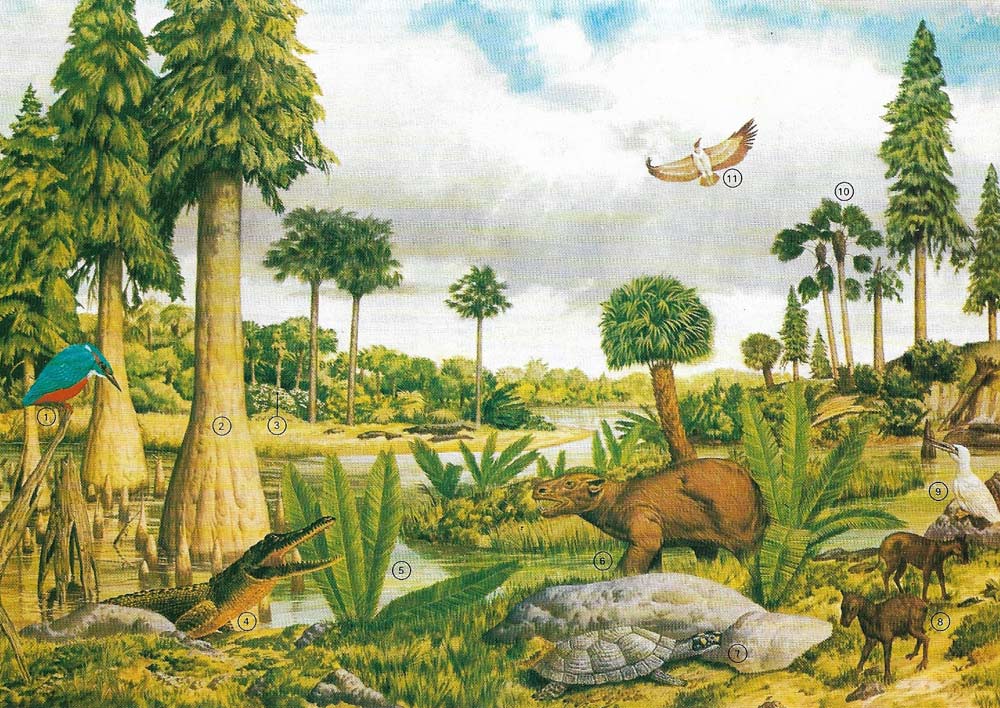 Southern England in Eocene times was a subtropical lowland supporting swamps of of modern plants such as swamp cypress (2), nipa palm (5), sabal palm (10), and magnolia(3). Mammals were by then common in such environments. In detail they might have looked odd to us, but in general their shapes and lifestyles would not have differed much from today's animals. The hippopotamuc-like Coryphodon (6) lived on riverbanks and fed on the roots torn up by its powerful tusks. In the forests lived the tiny early horse Hyracotherium (8) that had a height of about 30 cm (12in) at the shoulder. It was adapted for life in the undergrowth and its teeth were suitable for cropping leaves rather than grass. The birds, too, had spread and evolved into types that would be recognized today. Halcyornis (1) was a kingfisher that lived above the waters of the swamps and streams. Lithornis (11) was a vulture that was very similar to the vultures flying today. The gannet-like Odontopteryx (9) was a coastal bird that fed on sea fish. Its beak was serrated with rows of barbs that resembled sharp teeth. Nobody knows for certain what color these birds were. The colors shown here are purely guesswork and based on the plumage of related modern birds. After the great reptiles of the Mesozoic had disappeared, only the more humble forms, such as lizards and snakes, lived on. In this particular area the remains of crocodiles (4) and the river-turtle Podocnemis (7) have been found. Both these animals were virtually identical with types that are found in present-day rivers and swamps. 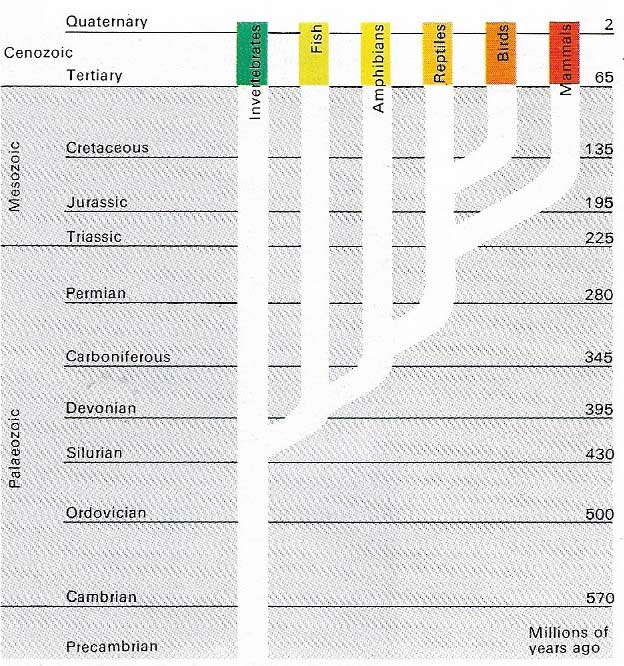 Fig 1. By the start of the Tertiary, the five main divisions of vertebrate life: mammals, rptiles, amphibians, birds, and fish, were clearly defined, and mammals had begun their rise to dominance over reptiles on land.

Fig 2. During the Miocene the forests that were typical of the lower Tertiary thinned out and were replaced by open grasslands. Running animals roamed these plains in herds. The plains of the Lower Miocene of North America looked very much like modern savannas. The Rocky Mountains were still being pushed up and this process was accompanied by great volcanic activity. Primitive horses have evolved into Parahippus (1), which showed a reduction of toes to three on each foot (from the original four on the fore-feet), and an adaptation of teeth to grazing. Dinohyus (2) was a pig as large as an ox. A corkscrew-shaped burrow (3), given the name Daemonelix, may have been occupied by some kind of rodent. Diceratherium (4) was a small, two-horned early rhinoceros. Stenomylus (5) was a long-necked camel that lived in herds as do today's antelopes. Moropus (6) was related to the horse but had claws instead of hooves.

Earth's most recent geological history, the last 65 million years or so, is known as the Cenozoic era and is made up of the Tertiary and Quaternary periods Fig 1). During that time landforms and climates changed slowly to the ones found on Earth today.

The first 27 million years of the Tertiary is divide into the Paleocene ("ancient period") and the Eocene (top illustration) ("dawn of modern life") during which mammals first began to play a dominant role in the life of the planet. The complete extinction of the great reptiles of the Mesozoic left the forests and plains deserted; as a result, the then humble mammal evolved within a few million years into a vast number of different forms that could make full use of the empty environments. The first mammals appeared in the Mesozoic: tiny animals known principally from their teeth – their fragile bones are rarely preserved. After these came the marsupials (pouched animals) and the placentals (animals that are nourished inside the mother's body). The placentals became dominant during the Eocene. So rapid was the evolution that all modern groups of mammals were represented, including maritime kinds such as whales and flying kinds such as bats. Birds also began to resemble their modern counterparts, although some became highly specialized and developed into creatures such as the ferocious, flightless, 2 m (6 ft) high Diatryma, which must have behaved rather like the smaller carnivorous dinosaurs. Bivalves and gastropods such as we have today appeared in the seas together with the kind of fish that we are familiar and a species of large, coin-shaped foraminiferan.

The Oligocene, which embraced the next 12 million years of the Tertiary, provided a continuation of the Eocene environment during which basic stocks of animal life became specialized. Horses, which appeared early in the Eocene in the form of Hyracotherium (Eohippus(, remained as forest-dwelling browsers but became a little larger. Rhinoceros-like creatures appeared such as Arsinoitherium, which had two small horns above the eyes and an enormous pair pointing forward above the nose, and the titanotheres, which were the size of elephants and carried great Y-shaped horns on their noses. These creatures only superficially resembled the true rhinoceroses that roamed the plains at this time.


Runners of the plains

During the next 19 million years – the Miocene (Fig 2) – the climate became more temperate. Grasslands flourished as the forests dwindled, and more animals became adapted to life in the open. Horses became longer-legged and their toes, which originally had numbered four in front and three behind, became fewer. In this way the animals became adapted to running on the plains, while their teeth became more suitable for eating grass than leaves. An early camel, Protylopus, was about the same size as the first horse. But in the Miocene, along with deer and other running creatures, it also grew leggier and better adapted to the plains. This was a time of upheaval on Earth. The Alps and Himalayas were being pushed up, the Andes were still rising and there was volcanic activity in North America accompanying the continuing upheaval of the Rockies.

After the Miocene came the comparatively short Pliocene, lasting about five million years. The huge, unwieldy mammals of earlier ages had died out and the animals that replaced them looked very much like the kinds we know today. The most important innovation was the appearance of an ape, Australopithecus, which walked upright on the plains of Africa and was advanced enough to use simple tools.


The coming of the ice ages

The lowering of temperatures at the end of the Pliocene heralded the coming of the Pleistocene (Fig 3) ice age about two million years ago. This was the beginning of the Quaternary period – the age of man. The glaciers came and went four times in response to a changing climate, and the animal life of the Northern Hemisphere had to adapt to it. The animals living in what are now temperate latitudes were Arctic forms with thick fur which were able to subsist on conifers, birches, and lichens. The woolly mammoth, mastodon, and woolly rhinoceros lived in this manner and fell prey to early man with his hunting skills. South of the ice sheets, Smilodon, a saber-toothed tiger, wrought havoc among the heavy, slow-moving ground sloths and the mastodons. Glacial conditions did not affect the whole of the world, nor were they continuous even in the glaciated areas. Warm periods occurred between the advances of the ice and during such times even elephants lived in latitudes as far north as the British Isles.

The Holocene, or Recent, which dates from the end of the Pleistocene, is such a short epoch that it cannot really be regarded as a distinct geological division. The modern pattern of climatic zones with different weather conditions seems to be exceptional and more stable worldwide climatic conditions seem to have existed throughout geological time – for example during the times when the deserts of the Permian and the forests of the Eocene covered the land. The last ice sheet has barely receded and it is possible that today's environment is another Pleistocene interglacial stage.