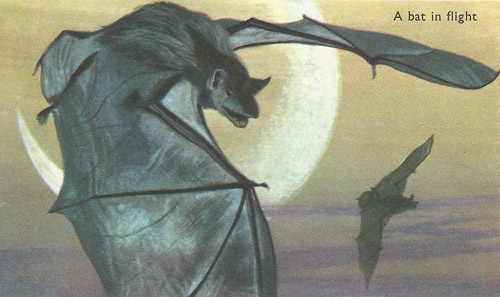 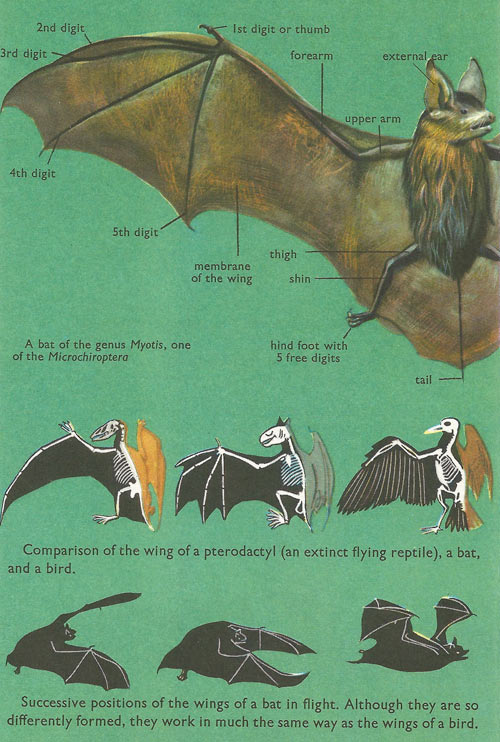 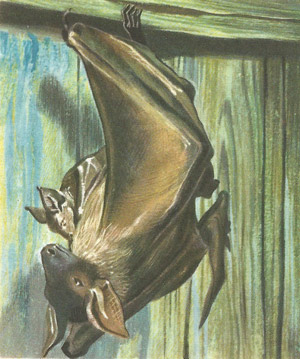 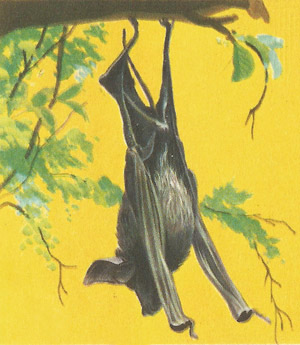 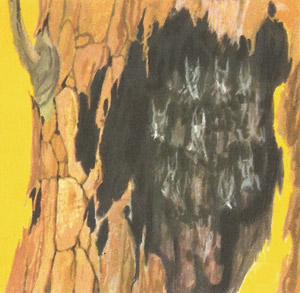 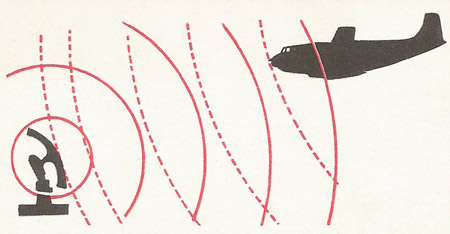 Fig 6. The principle of radar is this: a transmitting station sends out electromagnetic waves into space. If they encounter any object (such as an airplane) some of these waves are reflected back to the station, which is equipped to receive and interpret them. The direction from which they come, and the interval of time between transmitting them and receiving them back, give an indication of the position and distance of the object.

Fig 7. Bats use the same principle but emit, not electromagnetic waves but short pulses of ultrasonic sound-waves, having a frequency of about 50,000 vibrations a second. When these strike a solid object they are thrown back, or reflected, in the form of an echo, which is perceived or 'heard' by the bat and which gives warning of the proximity of the object and information about its shape and size. Bats undoubtedly hunt insects at night by this means, as well as using it to find their way. In the illustration here, a bat suddenly checks its flight, warned of an obstacle by the echo of its sound-pulse. 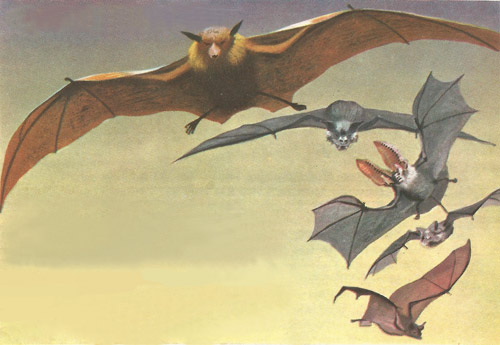 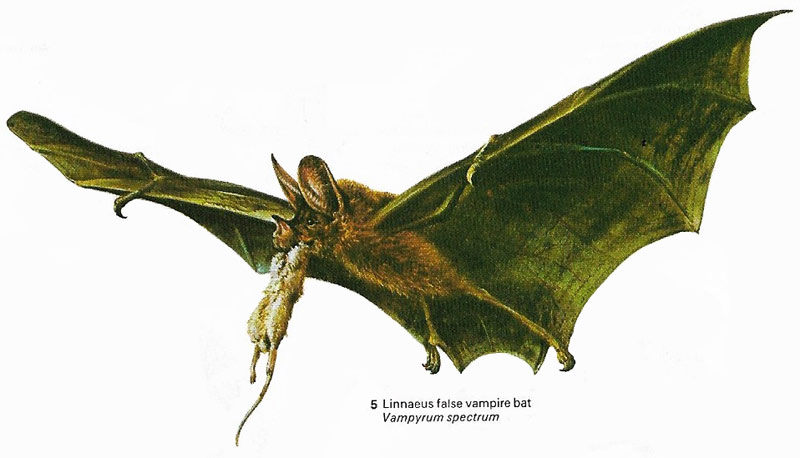 Fig 9. The largest bat in the New World, with a wingspan of up to 91 cm (36 in), is the Linnaeus false vampire bat. It belongs to the family Phillostomidae. The bat's name indicates its feeding habits for it does not suck blood like a true vampire but feeds on rodents, birds, insects, and fruit.

Bats comprise the order Chiroptera, which includes 178 genera, of mammals (class Mammalia). Unlike other mammals, bats can fly, the front limbs being modified to support a membranous wing. Most bats are nocturnal in habits and most are found in tropical regions. They are able to navigate in complete darkness by means of a kind of sonar, which uses echoes of the bats own supersonic squeaks to locate obstacles and prey. There are about 800 living species. Most are small, although they range in wingspan from 25 m to 147 cm (10–58 in).

Most bats eat insects. Their wings are attached to their forelimbs, which are long and slender and have elongated finger bones that support the fragile membrane. The rear of the wing is attached to the bat's hind legs and is sometimes extended to include the tail. Bats make up almost a quarter of all placental species. They owe their success possibly to the fact that they occupy a niche left vacant by the diurnal birds, because most bats are nocturnal, insect-eaters. They feed mainly on night-flying creatures which they detect with a highly sophisticated sonar system. There are far fewer bats in temperate regions than in the tropics, where they diet compromises a much wider range of food, including blood, fish, and fruit.

On any warm summer evening in the country you are likely to see bats flying overhead (Fig 1). If you have sharp ears you will be able to hear their very shrill squeaking. It is an interesting fact that, while most of us can hear bats when we are young, we cease to be able to when we approach middle age. This is because our ears become less sensitive to very high-pitched sounds.

At one time bats were associated with powers of evil and darkness, and the flying demons of legend were always equipped with bats' wings. They are, in fact, interesting creatures, and the great majority are entirely harmless.

Although bats look somewhat like birds, they are mammals, like rats and mice and humans. Their bodies are covered with fur, not feathers, and they have small, sharp teeth.

During the winter months bats hibernate.

Young bats are born in the summer. They are naked at first and are carried about by the mother, clinging to her fur, for several weeks (Fig 3). When the baby bat is too large for this, it is left at home in the roosting place at night, while its mother goes out to hunt for food. It is able to fly and take care of itself at about two months old. Baby bats are suckled with milk, as are all mammals, the nipples of the mother being situated one on each side of her chest.

Bats usually have only one baby at a time, though twins are born occasionally. For such small animals hey have a rather long span of life. A bat is not adult until it is two years old and may live for ten years or more. Other small mammals, such as mice, seldom live more than one or two years.

The resting position of bats is unusual: they hang head downwards by means of the curved claws on their hind feet (Fig 4). In this position the toes automatically grip the support, being pulled by tendons that are stretched by the weight of the body.

Very few bats migrate, as some birds do, to escape the cold of winter. Most of those that live in temperate climates hibernate. In the autumn they seek shelter in caves or in hollow trees (Fig 5) and sleep throughout the winter in their hanging position.

In cold weather a hibernating bat is only just alive. Breathing is intermittent, periods of three to eight minutes passing without breathing at all, and the consumption of oxygen is only about one-hundredth of that of the bat when it is awake and active. The body temperature may fall to freezing point.

Late in the eighteenth century an Italian naturalist, the Abbe Spallanzani, showed that bats find their way and avoid obstacles in flight by means of some sense other than that of sight. He released blindfolded bats in a room that was lighted, so that the animals' movements could be observed. They flew about quite freely, avoiding obstacles just as if they could see them.

It was not until 1941 that this remarkable 'extra sense' was satisfactorily explained. In that year two American scientists showed that bats use a system of echo-location similar to radar.

Bats are the only vertebrate animals, other than birds, that can really fly. In past ages a group of reptiles called pterodactyls had the power of flight, but they became extinct millions of years ago. They had wings of skin, rather like those of bats but supported on the arm and one finger.

The wing of the bat is formed of skin stretched over the bones of its forelimbs and hands. The fingers are greatly elongated and help to extend the wing, acting in the same way as the ribs of an umbrella. The name of the order, Chiroptera, is derived from Greek words meaning 'hand-wing'. The first digit, or the thumb, is not included in the wing and it carries a claw that the bat uses to climb and crawl about. The wing membrane extends behind the bat to include the hind limb (but not the foot), and in most bats the tail as well. The wing membrane is really an extension of the skin of the back and belly, carried out on each side of the body. It is therefore double, and between the two layers are the blood vessels and nerves which maintain the wing as living tissue.

Almost all bats fly at night and sleep during the day. The small ones catch nocturnal flying insects, but the fruit bats seek out fruiting trees and may do serious damage in orchards. Most small bats have a fluttering flight with rapid wing-beats, but the big tropical 'flying foxes' fly in a steady course with slow wing-beats, like a rook or a crow.

Comparison of the wing of a pterodactyl (an extinct flying reptile), a bat, and a bird.


Some different kinds of bats

See Fig 8, from top to bottom:

Flying fox or Pteropus. These giant tropical bats may have a wingspan of over four feet.

Long-eared bat. A little bat with enormous ears as long as its body.

Bulldog bat. So called because it has a face rather like a bulldog.

Vampire bat. It lives on the blood of animals.

Within the class Mammalia the bats form an order called the Chiroptera.

The order is divided into two sub-orders, the Megachiroptera and the Microchiroptera (terms which means simple 'large bats' and 'small bats'). The former are the fruit bats and flying foxes of the tropics, which live on fruit: the largest have a wingspan of over four feet. The majority of bats (including all those of the temperate regions) belong to the Microchiroptera: most of these are insect-eaters, but one group, the vampire bats of tropical America, feed on the blood of mammals, including man.

Nearly a thousand species of bats are known, of which twelve are native to Great Britain.