Extinct elephants differed from each other in the shape of the head. After the tapir-like Eocene ancestral Moeritherium (A), the body size soon reached that of today's elephants. Trilophodon (B) from the Miocene had four tusks, two in the upper jaw and two in the lower. Miocene Deinotheroim (C) had a pair of downward curving tusks in the lower jaw, probably used as picks. Platybelodron (D), also from the Miocene, had its lower tusks expanded and flattened into a kind of shovel for scooping water-weed. Mammuthus (E), the Pleistocene woolly mammoth, was adapted to withstand cold. 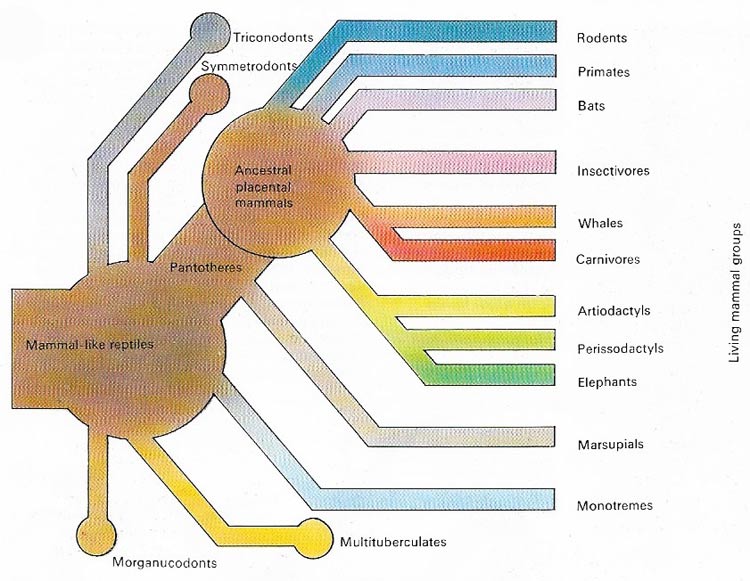 Fig 1. Mammals evolved in the Triassic from reptiles with mammal-like characteristics. They formed several groups, each possibly descended from the reptiles separately. Of these groups all have died out except two, and one of those – the monotremes – has only two living examples, the platypus and the echidna. The other group, the pantotheres, has diversified into the wide range of mammal life known today. Little is known about the other early groups because fossils are rare, they remain enigmatic creatures none larger than a cat, differing from each other in the shape and the arrangement of their teeth. 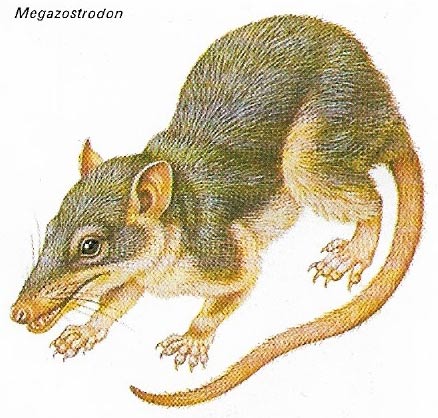 Fig 2. Megazostrodon was one of the earliest pantotheres and its remains have been found in Triassic rocks of Africa. It was about 10 cm (4 in) in length and was built rather like a reptile. It can be regarded as being very close to the ancestor of modern mammals, if not the actual ancestor, and its appearance was typical of that of all primitive mammals during the time of reptile dominance. 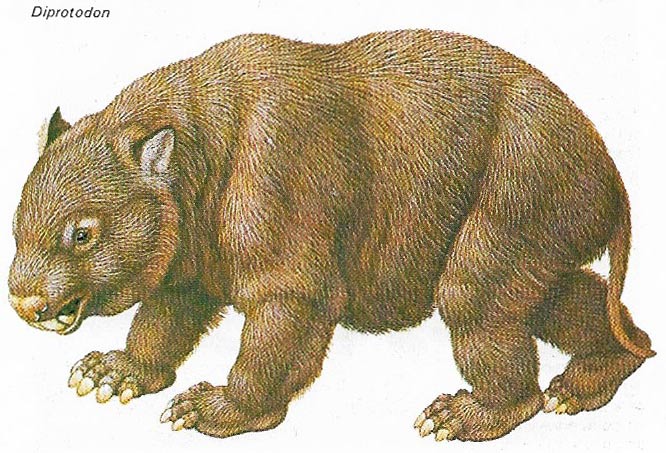 Fig 3. The marsupials, a group of mammals that carry their young in pouches, developed early and some grew to a large size. Diprotodon was a Pleistocene wombat as large as a grizzly bear. 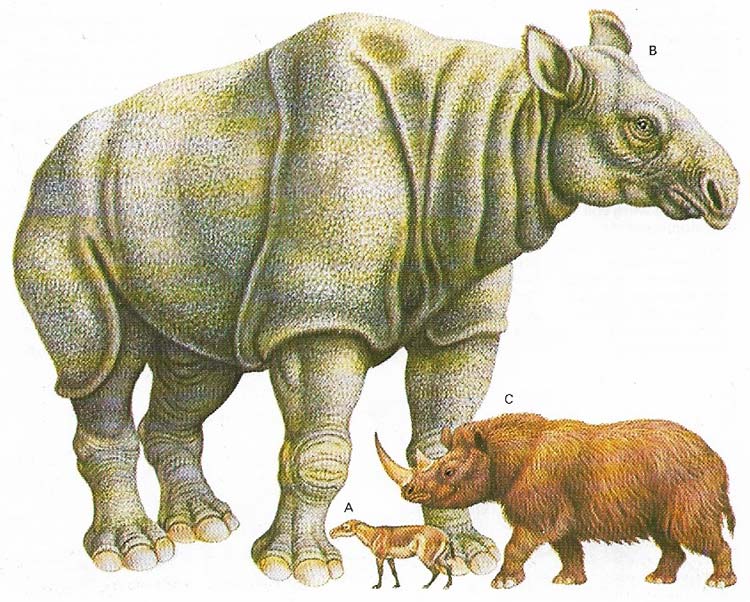 Fig 4. The rhinoceros group is a division of the perissodactyls (odd-toed ungulates) that has existed for a long time. The earliest known is Hyrachyus(A), a dog-sized creature from the Eocene. This developed into Baluchitherium (B), the largest land mammal ever, 5 m (16 ft) high. Later members, such as the woolly rhinoceros (C), achieved the more modest size of today's rhinoceros. 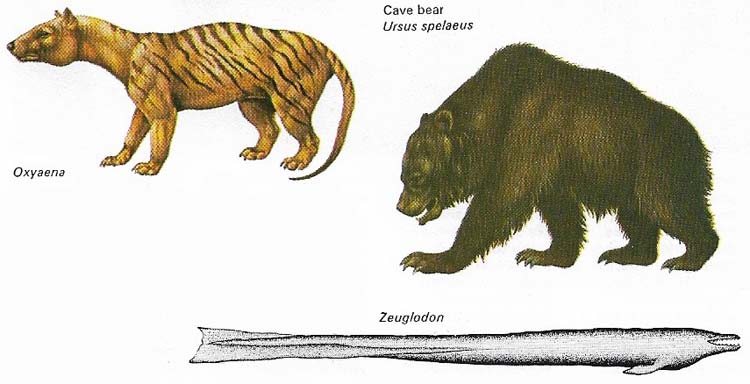 Fig 5. Carnivorous mammals evolved to feed on the newly developed herbivorous mammals. The early carnivores, called creodonts, were quite unlike any we know today. They included animals such as Oxyaena. It was not until late in the Eocene or the Oligocene that their descendants, the more modern carnivores, replaced them. These carnivores were, even then, divided into the groups that are now familiar – cats, dogs, bears, weasels, and also seals. Ursus spelaeus, the cave bear, was one of the larger Pleistocene carnivores but modified its feeding habits and lived on roots and nuts. A very different descendant of the creodonts is the whale. It adopted its fish-like form rapidly, as in the Eocene Zeuglodon, but has since evolved both social and mentally. 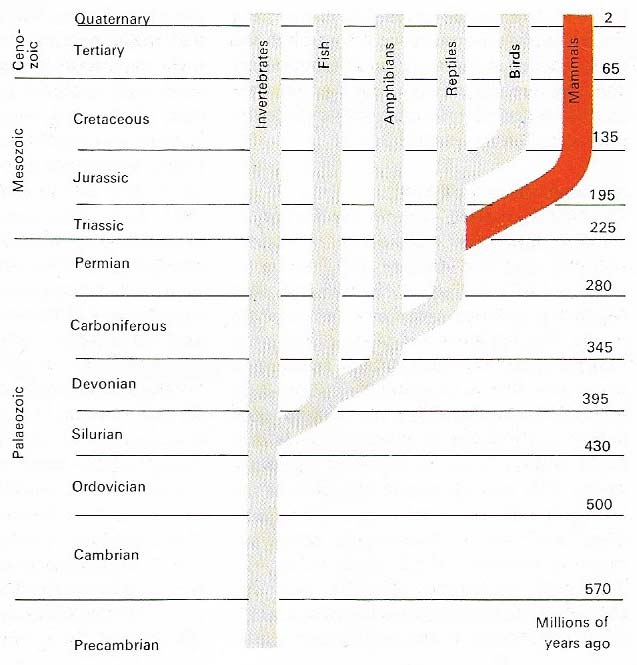 Fig 6. Primates began to evolve from Eocene insectivores that resembled tree shrews. Notharctus was a lemur-like creature on the road to man.

These mammalian characteristics include warm-bloodedness and hair (unfortunately impossible to determine from fossil evidence), which are both temperature-regulating systems. A reptile can operate only with short bursts of activity followed by long periods of rest. A mammal, on the other hand, can live a continuously active existence. To support this it needs more food and a more efficient digestive system, thus different cutting, tearing, and chewing teeth evolved. The palate appeared, enabling an animal to eat and breathe at the same time. The lower jaw became a more simple structure and an advanced hinge enabled it to be brought up to the upper jaw with great accuracy, allowing a more precise chewing action. With this simplification of the jaw the bones "left over" were incorporated into the ear and made hearing more efficient. But the most significant difference between mammals and reptiles is in reproduction. A mammal bears its young alive in a more or less fit state to survive. In contrast, reptile development usually takes place in an egg at the mercy of the elements and any predators.

Despite the advantages conferred by mammalian anatomy and physiology the new line did not catch on for some 160 million years. During the Mesozoic the mammals existed in several orders all of which consisted of small creatures resembling shrews. These differed from one another in their teeth, but very little is known about them for their remains are scattered and fragmentary. They suffered a fate similar to that of the early reptiles – extinction – and only one line really came to anything. These were the pantothenes that gave rise to practically all modern mammals. One of the ancient groups is represented today by the monotremes – the echidna and duck-billed platypus. These are true mammals, although they lay eggs, and were it not for their specialized lifestyles they could provide a valuable insight into mammalian evolution.

The extinction of most orders of reptiles at the end of the Mesozoic left the environments empty and the small mammals expanded and diversified to fill the void. They produced hoofed animals to browse the forests and graze the plains, carnivores to feed on the herbivores, rodents to live in the undergrowth, primates to climb trees, bats to fly, and whales to swim in the seas while the original mode of life was continued by the insectivores. All this evolutionary advance was established within a few million years of the extinction of the great reptiles.

This specular evolution of the mammals began in the Tertiary period a mere 65 million years ago, so the remains of the extinct mammals tend to be better preserved than those of the great reptiles that preceded them and evolutionary lines of the horses are well known, from the tiny Hyracotherium (eohippus) to the present-day Equus. The evolution of the titanotheres – elephant-sized rhinoceros-like herbivores – can be traced from the dog-sized

Certain mammals, however, showed what is known as convergent evolution in which unrelated creatures adopt similar lifestyles and evolved to look like one another. Coryphodon of the Eocene behaved and looked like the hippopotamus but was not related to it. Stenomylus was a camel that looked more like a gazelle and lived on grassy plains rather than in deserts.

Carnivores as we know them developed in Oligocene times, quite late in the history of mammals. They were precede by the archaic carnivores – the creodonts – which were quite generalized meat-eating creatures. These probably gave rise to the whales as well as the advanced carnivores such as the great wolves and cave bears of the Quaternary. Most of the cats throughout the Tertiary and Quaternary (such as Hoplophoneus of the Oligocene and Smilodon of the Pleistocene) had long saber-like teeth as their weapons. With these they made powerful slashing attacks, wounding their victims so deeply that they bled to death. This was an efficient way of killing the large, thick-skinned animals that abounded at that time. Modern cats, on the other hand, have smaller teeth and can run down fast grazing animals and kill them by breaking their necks.

Extinct side branches from the ungulate and elephant lines gave rise to the uintatheres – rhinoceros-like animals with six horns and powerful tusks – and chalicotheres, horse-like creatures with claws, not hoofs. The primates developed rapidly throughout the Tertiary from tree shrews and tarsier-like creatures in the Eocene, through lemurs to monkeys and apes in the late Tertiary. One of these lines eventually developed into our own species.