Results from NASA's NEOWISE survey find that more potentially hazardous asteroids are closely aligned with the plane of our solar system than previous models suggested. This diagram shows an edge-on view of our solar system. The dots represent a snapshot of the population of NEAs and PHAs that scientists think are likely to exist based on the NEOWISE survey. Positions of a simulated population of PHAs on a typical day are shown in bright orange, and the simulated NEAs are blue. Earth's orbit is green. The diagram shows that the orbits of the PHAs tend to be more closely aligned with the plane of our solar system, or less tilted above and below the plane, than the NEAs. This characteristic of PHAs was known before the NEOWISE survey. Now, NEOWISE has found the PHAs to be about twice as likely to have these lower-inclination orbits than previously thought.

On February 15, 2013, a small asteroid exploded over Chelyabinsk, Russia, at a height of about 30 km. 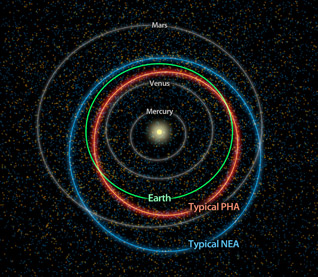 The differences between orbits of a typical near-Earth asteroid (blue) and a potentially hazardous asteroid, or PHA (orange). 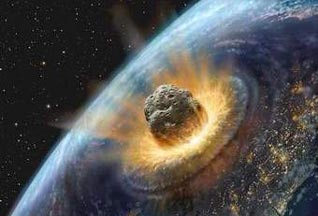 A potentially hazardous asteroid is a near-Earth asteroid (NEA) whose orbit can bring it so close to Earth that there is a risk (typically very small) of a future collision. Past asteroid and comet impacts have had dramatic effects both on a local scale, as in the case Tunguska event, and globally – for example, the mass extinction at the Cretaceous-Tertiary boundary.

Scientists have adopted a very specific definition for the term "potentially hazardous asteroid," which is any asteroid with an Earth Minimum Orbit Intersection Distance (MOID) of 0.05 AU or less and an absolute magnitude (H) of 22.0 or less. In other words, an asteroid that can't get any closer to Earth than 0.05 AU (roughly 7,480,000 km or 4,650,000 m) or is smaller than about 330 m (500 ft) in diameter is not considered to be a PHA. Currently just over a thousand potentially hazardous asteroids are known, out of a total population estimated to be 4,700±1,500 (based on an analysis of data from the NEOWISE survey published in May 2012).

Planetary scientists have developed a means of conveying the risks associated with asteroids and comets that might collide with the Earth. This risk-assessment scale, called the Torino scale, is similar to the Richter scale used for measuring earthquakes. The Torino scale runs from zero to 10. An object with a value of zero or one will have virtually no chance of causing damage on Earth; a 10 means a certain global climatic catastrophe.

The growing realization that Earth will inevitably be hit hard again at some point, with potentially catastrophic results for human and other life, has led to the setting up of several programs to detect and monitor NEAs (or, more generally, NEOs – near-Earth objects – which also include short-period comets) and near-Earth threatening objects. Among these projects are the Spacewatch Project, LINEAR, the Spaceguard Foundation, and the Jet Propulsion Laboratory's NEO Program.

The current biggest threat of a collision with Earth is posed by the asteroid Apophis. This 400-m-wide space rock will come closer to Earth in 2029 than the orbits of many communications satellites – but it will not hit the planet. The concern centers on the small chance that its orbit could be altered enough during the flyby to put the rock on a collision path for its return in 2036. In 2006, the Planetary Society announced a $50,000 prize to be given to the designers of the mission that would allow the asteroid's orbit to be tracked with the most precision. The competition has support from the US and European space agencies. It was won in February 2008 by a team led by Atlanta-based SpaceWorks Engineering. The Foresight spacecraft, if it goes ahead, will launch in about 2012, rendezvous with Apophis, determine its center of mass, and take regular measurements of its position relative to the asteroid. These measurements will be used to reduce the uncertainties in Apophis' orbit.

2004 VD17 is a near-Earth asteroid which, for several months in early 2006, topped the league of potentially hazardous asteroids as measured by the Torino scale. Although its rating was only 2 ("impact very unlikely") on this scale, it was only the second asteroid to achieve even this modest value. Based on observations available at the time, 2004 VD17 was estimated to have a 1 in 1600 chance of striking the Earth on May 4, 2102, and a 1 in 500,000 chance of hitting two years later. The odds of a collision in 2102 have now been reduced to 1 in 63,000 and the asteroid's Torino rating to 1.

Even a relatively small asteroid, with a diameter of 100 m, could have a devastating effect on the Earth and its life because of its high incoming velocity. The kinetic energy (energy of motion) of an object is given by the formula

where m is the mass of the object and v its velocity. If the velocity is high, then velocity squared is large and this makes the kinetic energy large if the mass is significant.

The table below shows the equivalent in megatons of TNT of the impact of asteroids of various masses and velocities, assuming a typical rock-like density for an asteroid of 2.5 kg/dm3. For comparison, the yields of the Hiroshima and Nagasaki atomic bomb explosions were approximately 15,000 tons and 21,000 tons, respectively. In other words, the smallest impact considered in the table (that of a 100-m-wide asteroid traveling at 15 kilometers per second) would be roughly 100 times more powerful than the devastating Hiroshima-Nagasaki attacks.

The B612 Foundation, a private organization pushing for a robust defense against potentially hazardous asteroids, released a video in April 2014 summarizing data collected by a network of sensors operated by the Nuclear Test Ban Treaty Organization. Between 2000 and 2013, this network detected 26 explosions ranging in magnitude from 1 to 600 kilotons. By comparison, the atomic bomb dropped over Hiroshima was equivalent to a blast of 15 kilotons. All 26 explosions were due to asteroids entering the Earth's atmosphere. One of the largest of them was the one that exploded over Chelyabinsk Oblast, Russia, in 2013. This newly disclosed data suggests we may have significantly underestimated the threat from small asteroids capable of causing significant local destruction and loss of life.