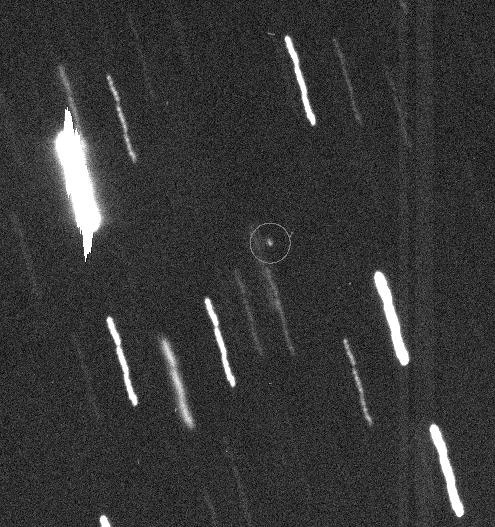 Orbit of Apophis around the Sun

99942 Apophis, previously known as 2004 MN4, is a member of the Aten group of near-Earth asteroids which , shortly after its discovery, had been estimated by NASA as having a 1 in 5500 chance of striking Earth in 2036. That estimate, however, depended on whether the asteroid would pass through a 600-m-wide region, known as a gravitational keyhole, during its close swing past Earth in 2029. If Apophis sneaked through the keyhole, its orbit could have been perturbed, possibly putting it on a collision course with our planet seven years later. However, radar observations of the asteroid, made in January 2013 during the asteroid's approach to Earth (at a very safe distance of 14 million km), revealed that there is now zero chance of a collision in 2036. Furthermore, its orbit is now so well known that accurate predictions of its whereabouts can be made far into the future.

Prior to the 2013 radar measurements, Apophis had a ranking of 1 on the Torino scale, down from an earlier value of 4 (the highest ever assigned to any asteroid). In October 2009, NASA scientists announced a sharply reduced estimate of the chances of collision – about one in 250,000. This has now been reduced to zero.

Apophis was discovered in 2004 and is thought to measure between 320–400 m in diameter. An asteroid of this size could destroy a large city. It was given its permanent name in 2005. "Apophis" is the Greek name of the Ancient Egyptian god Apep (the Destroyer).

The B612 Foundation, a non-profit group studying ways to deflect Earth-bound asteroids, has urged NASA to consider mounting a mission to nudge the asteroid off course to avoid a potential catastrophe. In response, NASA made the decision to carry out radar measurements in 2013 to determine if Apophis really was a threat; if it had been, the plan was to send a spacecraft to the asteroid, for arrival in about 2019, to learn more about it. The spacecraft could have dropped a radio transponder onto the surface or leave it close to the asteroid. This would have helped scientists refine their prediction of the asteroid's orbit, and learn whether its future path would include a fatal rendezvous with Earth. The same technique could be applied to other asteroids if future observations warrant any concern about the potential for a damaging encounter.