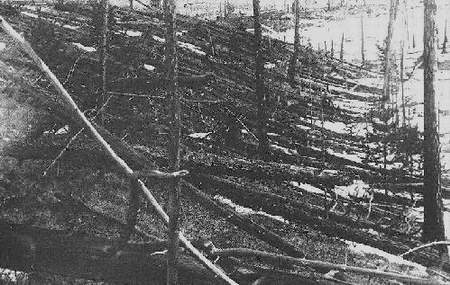 A violent explosion that took place over the valley of the Stony Tunguska river, in central Siberia, at 7.17 am local time (0h 17m 11s UT), on June 30, 1908, with the epicenter at 60°55' N, 101°57' E.13 This location is in the central Siberian area of Russia, about 1,000 km north of the town of Irkutsk and Lake Baikal. The event is now widely attributed in the astronomical community to the detonation of icy material from a comet in Earth's atmosphere. The blast, which stripped or felled trees out to a radius of 40 km, burned reindeer to death, and sent the tents of nomads flying through the air, was preceded by the observed passage across the sky of a dazzling blue bolide, said to be almost as bright as the Sun, trailing a column of dust. The explosion registered at seismic stations across Eurasia, and produced fluctuations in atmospheric pressure strong enough to be detected by the recently invented barographs in Britain. Over the next few weeks, night skies over Europe and western Russia glowed brightly enough for people to read by. In the United States, the Smithsonian Astrophysical Observatory and the Mount Wilson Observatory observed a decrease in atmospheric transparency that lasted for several months. The size of the blast was later estimated to be between 10 and 15 megatons.


First impressions – or lack of them

The first report of the explosion was in the Irkutsk paper dated July 2, 1908, published two days after the explosion:

[T]he peasants saw a body shining very brightly (too bright for the naked eye) with a bluish-white light... The body was in the form of 'a pipe', i.e. cylindrical. The sky was cloudless, except that low down on the horizon, in the direction in which this glowing body was observed, a small dark cloud was noticed. It was hot and dry and when the shining body approached the ground (which was covered with forest at this point) it seemed to be pulverized, and in its place a loud crash, not like thunder, but as if from the fall of large stones or from gunfire was heard. All the buildings shook and at the same time a forked tongue of flames broke through the cloud. All the inhabitants of the village ran out into the street in panic. The old women wept, everyone thought that the end of the world was approaching.

S. B. Semenov, an eyewitness in the village of Vanovara about 60 km south of the explosion site, gave an excellent information:

I was sitting in the porch of the house at the trading station of Vanovara at breakfast time ... when suddenly in the north ... the sky was split in two and high above the forest the whole northern part of the sky appeared to be covered with fire. At that moment I felt great heat as if my shirt had caught fire; this heat came from the north side. I wanted to pull off my shirt and throw it away, but at that moment there was a bang in the sky, and a mighty crash was heard. I was thrown to the ground about three sajenes [about 7 meters] away from the porch and for a moment I lost consciousness... The crash was followed by noise like stones falling from the sky, or guns firing. The earth trembled, and when I lay on the ground I covered my head because I was afraid that stones might hit it.

Soviet mineralogist Leonid Kulik, who first investigated the event, initially assumed that it had been caused by the fall of a giant iron meteorite but the absence of any crater quickly led to this idea being abandoned. The cometary theory was first put forward in the 1930s by Soviet astronomer I. S. Astapovich1 and English meteorologist Francis Whipple20. However, other more exotic explanations later stemmed from the rumored existence of anomalous radiation at the site.

In a science fiction story of 1946, Soviet author Alexander Kazantsev developed the idea that a nuclear-powered spacecraft from Mars, on a visit to collect fresh water from Lake Baikal, had exploded, showering the area in radioactivity. A prominent Soviet scientist, Alexei Zolotov, after a 17-year investigation, expanded on the nuclear explosion theory and Kazantsev's alien spacecraft speculation (TASS news release, mid-Oct 1976). According to Zolotov, a spaceship controlled by "beings from other worlds" may have caused the 1908 explosion. He imagined a nuclear-propelled craft that exploded accidentally due to a malfunction. Zolotov admits to problems with the theory, realizing that safety devices would probably prevent such a mishap, and noting that the actual area of destruction was "an amazing demonstration of pinpoint accuracy and humanitarianism." The science writer T. R. LeMaire developed this idea14, suggesting "The Tunguska blast's timing seems too fortuitous for an accident." He claims that a five-hour delay would make the target of destruction St. Petersburg, adding that a tiny change of course in space would have devastated populated areas of China or India.

Can we assume that the 'pilot' chose a cloudless day with excellent visibility from aloft to assure a safe drop? American Military strategy called for identical weather conditions; for a perfect strike on Hiroshima's industrial heart, the Enola Gay's bombardier was forbidden to release through a cloud cover: he had to see the target below. To maximize blast destruction, minimize radiation perils: the bomb was set to explode at a high altitude rather than against the ground. Similarly, the Siberian missile detonated high in the air, reducing or even eliminating fallout hazard.

A similar scenario has been advocated as a genuine scientific hypothesis by Mikhail Agrest and others. However, geochemist Kirill Florensky of the Soviet Academy of Sciences, who led expeditions to the site in 1958, 1961, and 1962, reported that the only radioactivity in the Tunguska trees could be explained as fallout from atomic bomb tests. Not surprisingly, interest in the possibility that an extraterrestrial spacecraft may have been involved continues unabated in the popular press. Most recently, in August 2004, a Russian expedition, led by Yuri Labvin, claimed to have recovered an "extraterrestrial device" from the scene of the incident. Its credibility was somewhat called into question by the group's mission, stated by Labvin to Pravda on July 29, 2004, "to uncover evidence that will prove the fact that it was not a meteorite that rammed the Earth, but a UFO." The claimed discovery of precisely such evidence just a few weeks later invites a skeptical response. It will be interesting to see if the device is ever made available for genuine scientific investigation!

The possibility that the Tunguska event could be explained by the collision of an antimatter meteorite was put forward in 1965 by by Clyde Cowan, C. R. Atluri, and Willard Libby5, and supported by Gentry8 in 1966. Cowan and his colleagues found a 1% jump in the radiocarbon (C-14) content of the rings of two trees, one in Los Angeles and the other, a 300-year-old Douglas fir, in Tucson, Arizona, for 1909, the year following the explosion. They proposed that the annihilation of an anti-rock in the atmosphere above the Tunguska site and caused the observed damage along with an increase in atmospheric radiocarbon. Unfortunately for this idea, careful C-14 measurements of a tree nearer the blast fail to show an increase in 1909 (Lerman et al. 1967). A possible explanation for the elevated C-14 content found by Cowan et al was suggested in 1977 by John Brown and David Hughes of the University of Sheffield4, who pointed out that sufficient neutrons to account for the American radiocarbon data could have come from the hot plasma generated by a comet's passage.

Another spectacular explanation for the Tunguska catastrophe was hatched by Jackson and Ryan in 1973. They suggested that a black hole with a mass of 1022 to 1023 g would have the necessary energy (1023 ergs) to have caused the Tunguska destruction. Jackson and Ryan argued that the black hole would cause the destruction as it pierced through the Earth with the ease of cutting soft butter, exiting the planet through the Atlantic Ocean. In 1974, Beasley and Tinsley2 refuted the black hole theory on the basis that microbarographs, which recorded the air waves of the explosion, didn't record any anaomalous air waves from the predicted exit point in the Atlantic. This is vital to the black-hole theory because the exit of the black hole from the Earth would be expected to exhibit devastating effects similar to those at its entrance. The black-hole concept also does not explain the magnetite and silicate globules found in the explosion region, nor does it account for the anomalously bright night sky observed over Europe. Beasley and Tinsley conclude, "All the evidence favors the idea that the impact which caused the Tunguska catastrophe involved a body with characteristics like a cometary nucleus rather than a black hole."

Most scientists are now reasonably content with the hypothesis that an exploding cometary nucleus or nucleus fragment was responsible for the Tunguska event. The generally accepted theory runs something like this: Above central Siberia on the morning of June 30, 1908, a small comet or cometary fragment entered the atmosphere from behind the Sun and moved in a southeast to northwest direction. It was composed of some 30,000 tons of water, methane, and ammonia ice with traces of silicates and iron oxides. Penetrating the atmosphere at approximately 60 km/s (130,000 mph), the object created an intense shock wave which wrapped tightly around its nose. As it descended, its nucleus exploded (possibly 3 times) approximately 8 km above the Earth's surface. A huge black cloud immediately appeared following the explosion which released 1023 ergs of energy. A heat wave with a temperature of approximately 16.6 million °C at the focus was generated that had a tree-scorching effect for a radius of 15 km. The heat wave was followed by air shock waves which disfigured or toppled 80 million trees occupying approximately 8,000 km2 of Siberian taiga, and triggered a seismic wave of Richter magnitude 5, yet left no crater. The dust from the tail of the comet moved away from the un and provided anomalously bright night sky in Europe and parts of Western Russia.


And this may be a crater that part of it formed

In 2007, a team of Italian scientists from the University of Bologna claimed that a lake located 8 km north-north-west of the epicenter of the Tunguska airblast may occupy a crater hollowed out by a chunk of rock that hit the ground. Lake Cheko, the researchers said, fits the proportions of a small, bowl-shaped impact crater. Their investigation of the lake bottom's geology revealed a funnel-like shape not seen in other lakes nearby. Moreover, a geophysical survey of the lake bed turned up an unusual feature about 10 m down which could be either compacted lake sediments or a buried fragment of space rock. The researchers plan to drill up to 10 m below the lake bed to the anomaly picked up in the survey and determine whether it really is extraterrestrial in origin.23 For more on the Bologna team's research, see their website at http://www-th.bo.infn.it/tunguska/.