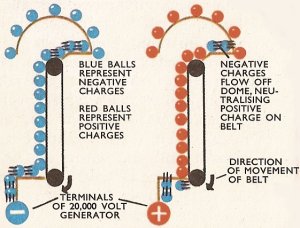 A Van der Graaff generator is a machine, first demonstrated in 1929 by the American physicist Robert J. Van der Graaf (1901–1967), which is capable of generating very high voltages, of the order of millions of volts.

The straightforward principle behind the Van der Graaf generator is as follows. Electric charges of the same type (either positive or negative) are put onto a moving belt, carried upwards by the belt into a hollow copper dome, and left there. This is a continuous process, the belt collecting charge at the bottom and depositing for storage at the top. As the amount of charge on the dome builds up, its voltage increases.

Suppose the dome is to be negatively charged. At the lower end of the machine is an electric generator capable of making a direct current of electricity at a relatively low voltage – about 20,000 V. To the negative terminal of this generator are attached a number of sharp metal spikes, which of course become negatively charged. They are fixed a short distance away from the moving belt.

The charges on the spikes are so densely packed that they are pushed off by fresh charges arriving from the generator. These jettisoned charges are carried by moving air molecules towards the belt which is in effect "sprayed" with negative charges.

The belt is made from an insulating material – rubber, silk, or linen – so that the charges stay fixed on the belt as it moves upwards.

When the voltage difference between the dome and the Earth is a few million volts, it becomes very difficult for the dome to hold its charge. Charges, closely crowded together on the outer surface, repel each other and start to leak away into the surrounding air, or else flow, in a gigantic spark, to Earth. To prevent this, the dome is highly polished so that there are no bumps where denser patches of charge can accumulate. The entire generator is placed in a steel enclosure filled with gas (sulfur hexafluoride or nitrogen) at high pressure. It is more difficult for the charge to leak through high-pressure gas than through ordinary air.

The Van der Graaff machine is used to accelerate streams of particles, so that they move quickly enough to produce interesting effects when they hit target atoms. The particles are initially stationary at the top of a long tube reaching from the top of the tube to the ground. When the dome is connected to the top of the tube, an enormous voltage accelerates the electrically charged particles towards the bottom of the tube. Usually the machine accelerates streams of positively charged particles, and the dome must be positively charged to repel the positive charges. To charge the dome positively, the lower spikes are attached to the positive terminal of the 20,000-volt generator.