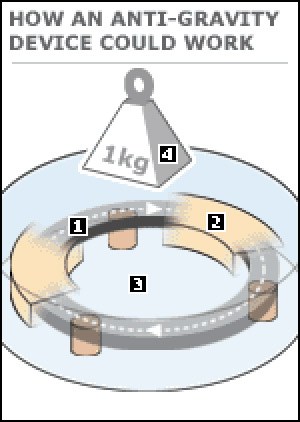 Antigravity is a hypothetical force that acts in a direction opposite to that of normal gravity. More generally, it may refer to any means of modifying the effects of gravity, through some form of shielding or otherwise.

Antigravity, gravity modification, and gravitational anomalies are subjects that have been considered both within and beyond the confines of conventional science. Most physicists remain skeptical of these ideas. However, that has not stopped aerospace companies carrying out research in them, scientific papers being published on them, and numerous plans being drawn up by inventors for antigravity devices, one of which was awarded a US patent.

In both Newton's law of gravitation and the general theory of relativity (Einstein's theory of gravitation), a requirement for antigravity to be possible is the existence of negative mass.1, 2 Most scientists regard negative mass as a purely hypothetical concept with no basis in reality. However, there is nothing in physics to say that it is actually impossible. A related idea that has been discussed by theoretical physicists involves gravitational shielding.

The notion of gravitational shielding was investigated in the 1920s by the Italian physicist Quirino Majorana. So-called Majorana shielding is hypothetical effect by which large masses (such as the moon) can partially block the gravitational force from more distant objects (such as the sun). This might explain the unusual and highly controversial efforts observed by some researchers in the behavior of pendulums during solar eclipses.

The origins of the idea of gravitational shielding go back to Nicolas Fatio de Duillier, a Swiss mathematician and one-time close friend of Isaac Newton. When Newton admitted he didn't know how gravity really worked, de Duillier suggested, in 1690, that it arose as a shadowing effect associated with the absorption by material bodies of minute particles. This "push" theory of gravity was then developed further, in the 18th century, by another Swiss mathematician, George-Louis LeSage, also remembered for building and patenting the first electric telegraph. LeSage believed there was some kind of pressure in space. Masses, he thought, shielded one another from this space pressure and are thus pushed together by the unshielded pressure on their opposite sides. Although LeSage's theory never won much support in the wider scientific community, it did strongly influence John Herapath, an English amateur scientist, in developing an early version of the kinetic theory of gases. It also came back into play when attempts were made to explain some anomalies in the motion of the moon that had been detected in the first decade of the twentieth century by Simon Newcomb.

In 1912 the German astronomer Kurt Bottlinger calculated the effects that would occur if the gravitational force between the sun and the moon decreased during lunar eclipses. What he found was a fluctuation in the moon's longitude that agreed with Newcomb's observations. Subsequently, Bottlinger's results were criticized by the Dutch astronomer Willem de Sitter, and Einstein tried to supply an alternative explanation in terms of changes of Earth's rotation due to tidal effects. However, Einstein's analysis was soon proved to be wrong, and for many years the moon's anomalous movements went unexplained. In the 1930s the mystery disappeared from view when astronomers began to use so-called ephemeris time, which was defined in a way that assumed the motion of the moon to be regular. Even before this, the widespread acceptance of general relativity undermined belief that an effect involving gravitational absorption could exist, pulling the rug from any further experimental and astronomical studies of this hypothesis. But it didn't stop Majorona. In the 1920s, the decade in which general relativity came of age, he did a series of lab experiments, involving lead and mercury shields, in which he reported a small gravitational absorption effect. There is a need for Majorona's research to be repeated to check if the shielding he found is real.

In the 1992, the Russian emigré scientist Yevgeny Podkletnov reported an antigravity or gravitational shielding effect involving a spinning superconductor.3 Podkletnov claimed he saw tobacco smoke rise over the spinning superconductor, so he measured the gravitational acceleration above the device and made the discovery. Podkletnov now claims to have created a force beam that is 200 times stronger than his first experiments.

In the wake of Podkletnov's announcement, Boeing, BAE Systems, and NASA all funded research to try to replicate the Podkletnov effect but with no reported success. An American scientist, Ning Li, independently predicted a gravity shielding effect with superconductors. In 1999, Popular Mechanics reported that Li and her team had built a working prototype to generate what Li described as AC Gravity. However, there has been no subsequent verification of the work.

The theme of antigravity appeared early in science fiction, a typical nineteenth century example being "apergy" – an antigravity principle used to propel a spacecraft from Earth to Mars in Percy Greg's Across the Zodiac (1880) and borrowed for the same purpose by John Jacob Astor in A Journey in Other Worlds (1894). More famously, in The First Men in the Moon (1901), H. G. Wells used moveable shutters made of "Cavorite," a metal that shields against gravity, to navigate a spacecraft to the Moon.4