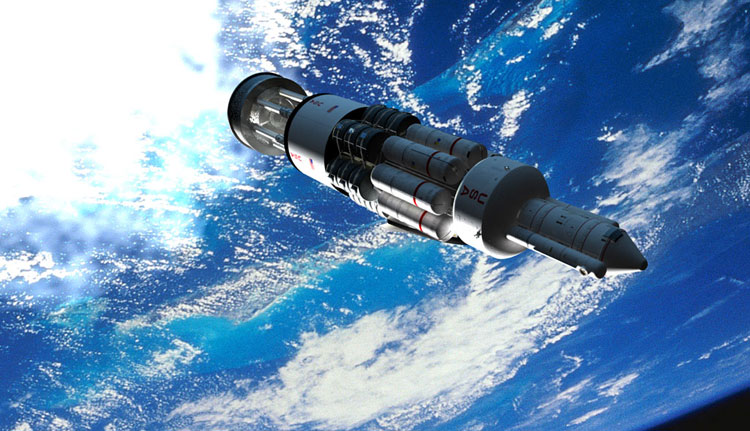 The 1960s Project Orion examined the feasibility of building a nuclear-pulse rocket powered by nuclear fission. It was carried out by physicist Theodore Taylor and others over a seven-year period, beginning in 1958, with United States Air Force support. The propulsion system advocated for the Orion spacecraft was based on an idea first put forward by Stanislaw Ulam and Cornelius Everett in a classified paper in 1955. Ulam and Everett suggested releasing atomic bombs behind a spacecraft, followed by disks made of solid propellant. The bombs would explode, vaporizing the material of the disks and converting it into hot plasma. As this plasma rushed out in all directions, some of it would catch up with the spacecraft, impinge upon a pusher plate, and so drive the vehicle forward.

Project Orion originated at General Atomics in San Diego, a company (later a subsidiary of General Dynamics) founded by Frederick de Hoffman to develop commercial nuclear reactors. It was de Hoffman who persuaded Freeman Dyson to join Taylor in San Diego to work on Orion during the 1958–59 academic year.

Ulam and Everett's idea was modified so that instead of propellant disks, the propellant and bomb were combined into a single pulse unit. Plastic was chosen as the propellant material, not only because of its effectiveness in absorbing the neutrons emitted by an atomic explosion but also because it breaks down into lightweight atoms such as those of hydrogen and carbon which move at high speed when hot. This approach, in tandem with the pusher plate concept, offered a unique propulsion system that could simultaneously produce high thrust with high exhaust velocity. The effective specific impulse could theoretically be as high as 10,000 to one million seconds. A series of abrupt jolts would be experienced by the pusher plate, so powerful that, if these forces were not spread out in time, they would result in acceleration surges that were intolerable for a manned vehicle. Consequently, a shock absorbing system was devised so that the impulse energy delivered to the plate could be stored and then gradually released to the vehicle as a whole.

Various mission profiles were considered, including an ambitious interstellar version. This called for a 40-million-ton spacecraft to be powered by the sequential release of ten million bombs, each designed to explode roughly 60 m to the vehicle's rear. In the more immediate future, Orion was envisaged as a means of transporting large expeditions to the Moon, Mars, and Saturn.

Taylor and Dyson were convinced that chemical rockets, with their limited payloads and high cost, represented the wrong approach to space travel. Orion, they argued, was simple, capacious, and above all affordable. Taylor originally proposed that the vehicle be launched from the ground, probably from the nuclear test site at Jackass Flats, Nevada. Sixteen stories high, shaped like the tip of a bullet, and with a pusher plate 41 m in diameter, the spacecraft would have utilized a launch pad composed of eight towers, each 76 m high. Remarkably, most of the takeoff mass of about 10,000 tons would have gone into orbit. The bomb units ejected on takeoff at a rate of one per second would have yielded 0.1 kiloton; then, as the vehicle accelerated, the ejection rate would have slowed and the yield increased, until 20-kiloton bombs would have been exploding every 10 sec.

It was a startling and revolutionary idea. At a time when the United States was struggling to put a single astronaut into orbit using a modified ballistic missile, Taylor and Dyson were hatching plans to send scores of people and enormous payloads on voyages of exploration throughout the solar system. The original Orion design called for 2,000 pulse units, far more than the number needed to reach Earth escape velocity. In scale, Orion more closely resembled the giant spaceships of science fiction than the cramped capsules of Gagarin and Glenn. One hundred and fifty people could have lived aboard in relative comfort in a vehicle built without the need for close attention to weight-saving measures.

One of the major technical issues was the durability of the pusher plate since the expanding bubble of plasma from each explosion would have a temperature of several tens of thousands of degrees, even at distances of 100 m or so from the center of detonation. For this reason, extensive tests were carried out on plate erosion using an explosive-driven helium plasma generator. The results showed that the plate would be exposed to extreme temperatures for only about one thousandth of a second during each explosion, and that the ablation would occur only within a thin surface layer. So brief was the duration of high temperatures that very little heat flowed into the plate, and the researchers concluded that active cooling was unnecessary and that either aluminum or steel would be durable enough to serve as plate material. The situation was similar to that in an automobile engine, in which the peak combustion temperatures far exceed the melting points of the cylinders and pistons. The engine remains intact because the period of peak temperature is short compared to the period of the combustion cycle.

Still, it was evident that some experimentation was needed and so the Orion team built a series of models, called Put-Puts or Hot Rods, to test whether or not pusher plates made of aluminum could survive the momentary intense temperatures and pressures created by chemical explosives. Several models were destroyed, but a 100-m flight in Nov 1959, propelled by six charges, was successful and demonstrated that impulsive flight could be stable. These experiments also suggested that the plate should be thick in the middle and taper toward its edges for maximum strength with minimum weight.

There was no obvious technical flaw in the Orion scheme, nor any argument to suggest that it could not be implemented economically. Its huge weakness, however, was that it depended upon atomic explosions that would release potentially harmful radiation into the environment – a fact that would ultimately be its undoing.


Orion, NASA, and the US Air Force

Early on, Taylor and his team recognized that they would need substantial government funding. The Advanced Research Projects Agency was approached in Apr 1958 and, in July, agreed to sponsor the project at an initial level of $1 million per year. However, this funding was short-lived. The newly-formed NASA was beginning to acquire all civil-oriented space projects run by the federal government, while the Air Force was assuming control over space projects with military applications. Orion was initially excluded from both camps because the Air Force felt it had no value as a weapon, and NASA had made a strategic decision in 1959 that the civilian space program would, in the near future at any rate, be non-nuclear. Most of NASA's rocket engineers were specialists in chemical propulsion and either did not understand or were openly opposed to nuclear flight. Moreover, NASA did not want to attract public criticism by being seen to favor atomic devices. Orion was ARPA's only space interest and in 1959 it decided it could no longer support the project on national-security grounds. Taylor then approached the Air Force which, after much persuasion, agreed to support Orion, providing that some military use could be found for it. However, Defense Secretary Robert McNamara was unconvinced that Orion could become a military asset, and his department consistently rejected anyincrease in funding, effectively limiting it to a feasibility study.

For the project to take off literally, it was essential that NASA become involved, so Taylor and James Nance, a General Atomics employee and later director of the Orion project, made representation to Marshall Space Flight Center (MSFC). They put forward a new design that called for the Orion vehicle to be carried into orbit as a Saturn V upper stage, the core of the spacecraft being a 90,000-kg "propulsion module" with a pusher-plate diameter of 10 m (limited by the diameter of the Saturn). This smaller design would restrict the specific impulse to between 1,800–2,500 sec – a figure which, though low by nuclear-pulse standards, still far exceeded those of other nuclear rocket designs. The proposed shock absorbing system had two sections: a primary unit made up of toroidal pneumatic bags located directly behind the pusher plate, and a secondary unit of four telescoping shocks (like those on a car) connecting the pusher plate assembly to the rest of the spacecraft. At least two Saturn V launches would have been needed to put the components of the vehicle into orbit. One of the missions suggested for this so-called first-generation Orion was a 125-day round trip to Mars, involving eight astronauts and around 100 tons of equipment and supplies. A great advantage of the nuclear-pulse method is that it offers so much energy that high-speed, low-fuel-economy routes become perfectly feasible.

Wernher von Braun, at MSFC, became a supporter of Orion but his superiors at NASA were not so enthused, and the Office of Manned Spaceflight was prepared only to fund another study. Serious concerns surrounded the safety of carrying hundreds of atomic bombs through Earth's atmosphere. And there was worse news to come for the project. With the signing of the nuclear test-ban treaty by the United States, Britain, and the Soviet Union in Aug 1963, Orion, as a military-funded program calling for the explosion of nuclear devices, became illegal under international law. The only way it could be saved was to be reborn as a peaceful, scientific endeavor. The problem was that, because Orion was classified, few people in the scientific and engineering community even knew it existed. Nance (now managing the project) therefore lobbied the Air Force to declassify at least the broad outline of the work. Eventually it agreed, and Nance published a brief description of the first generation, Saturn-launched vehicle in Oct 1964. The Air Force, however, also indicated that it would be unwilling to continue its support unless NASA also contributed significant funds. Cash-strapped by the demands of Apollo, NASA announced publicly in January 1965 that no money would be forthcoming. The Air Force then announced the termination of all funding, and Orion quietly died. Some $11 million had been spent over nearly seven years.

Overshadowed by the Moon race, Orion was forgotten by almost everybody except Dyson and Taylor.1 Dyson reflected that "this is the first time in modern history that a major expansion of human technology has been suppressed for political reasons." In 1968 he wrote a paper2 about nuclear pulse drives and even large starships that might be propelled in this way. But ultimately, the radiation hazard associated with the early ground-launch idea led him to become disillusioned with the idea. Even so, he argued that the most extensive flight program envisaged by Taylor and himself would have added no more than 1% to the atmospheric contamination then (c. 1960) being created by the weapons-testing of the major powers.

Being based on fission fuel, the Orion concept is inherently "dirty" and probably no longer socially acceptable even if used only well away from planetary environments. A much better basis for a nuclear-pulse rocket is nuclear fusion – a possibility first explored in detail by the British Interplanetary Society in the Daedalus project.