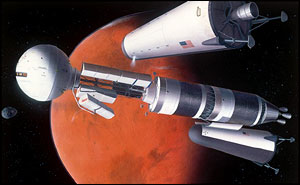 Project Prometheus was a NASA program, announced in Jan 2003, to develop nuclear propulsion and nuclear power generating systems that could ultimately be used to take a manned mission to Mars and to power other ambitious deep space vehicles. Supporters of the concept argued that nuclear power could change the nature of space exploration, but add that it will take many years and significant resources to develop into a mature form.

The technology was studied in the 1950s and 1960s in initiatives such as NERVA and Project Orion, but was subsequently dropped, partly for political (1963 nuclear test-ban treaty) and partly for financial reasons. Central to the new approach is NASA's Nuclear Systems Initiative (NSI), which was launched in 2002 following comments made by NASA's Administrator, Sean O'Keefe, that nuclear propulsion was the most efficient way to explore deep space and send astronauts to Mars. The Bush Administration has proposed a five-year $3 billion budget for Prometheus, though how this will be affected by the loss of the Space Shuttle Columbia remains to be seen. O'Keefe told the Los Angeles Times in mid-January 2003: "We're talking about doing something on a very aggressive schedule to not only develop the capabilities for nuclear propulsion and power generation but to have a mission using the new technology within this decade." A spokesperson for the Planetary Society has backed the idea: "In the long run, nuclear power and propulsion will likely be needed for missions to carry humans to Mars and back."

Using current rocket technology, it would take at least six months to cruise to the Red Planet. Project Prometheus could cut this travel time to two months. (In Greek mythology, by the way, Prometheus, son of the Titan Iapetus and the Oceanide Clymene, supposedly stole fire from his cousin Zeus and gave it to man. It is also the name of one of Saturn's small moons.) Advocates say that the nuclear option would make a manned Mars mission much easier, as it would reduce the need to carry so much food, fuel, and oxygen, as well as the need to rely on yet to be perfected recycling technology. Nuclear power would also mean that Martian launch windows would be longer, allowing a more flexible choice of launch and return times, leading to a manned landing mission that could last as little as three or four months, as opposed to about three years. Robert Zubrin of the Mars Society and author of The Case For Mars commented: "The decision by NASA to revive its nuclear rocket development program is a tremendously positive step that will greatly enhance the prospects for human exploration and settlement of the Solar System. Nuclear power reactors are essential for Mars base surface power, where they provide the power for reliable life support, ultra-high data-rate communications, and the in-situ production of ascent and return propellants, thereby increasing mission science return and cutting launch costs even more."

Nuclear power could also revolutionize the unmanned exploration of the outer Solar System. Current rocket technology does not allow a space probe to reach Pluto and go into orbit around it: only a flyby is possible. Chemical rockets also make it very difficult to get a probe to orbit such significant bodies as Jupiter's ice-crusted moon, Europa, a possible abode of life, or Titan, Saturn's major moon.

One of the first practical applications of the Prometheus Project is likely to be the Jupiter Icy Moons Orbiter (JIMO) – a mission to study Callisto, Ganymede, and Europa. Making use of nuclear electric propulsion, the probe would jump from moon to moon and study each of those objects in an intensive manner. Three crosscutting themes, identified by a NASA-chartered science definition team, drive the proposed JIMO investigations. The themes are: evaluate the degree subsurface oceans are present on these moons; study the chemical composition of the moons, including organic materials, and the surface processes that affect them; and scrutinize the entire Jupiter system, particularly the interactions between Jupiter, the moons' atmospheres and interiors. The project is managed by the Jet Propulsion Laboratory (JPL). Before JIMO, nuclear technology could be proved with a less ambitious mission, perhaps a nuclear-powered probe to the Moon.

Inevitably, the development of the nuclear propulsion systems will spark controversy from anti-nuclear groups. They opposed the launching of the Cassini probe to Saturn in 1997. Because the spacecraft uses plutonium to generate electricity for its onboard instruments, environmentalists feared that a launch failure or an accidental reentry could have led to widespread contamination.