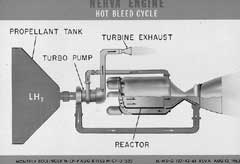 Fig 2. Artist's concept of the NERVA engine's hot bleed cycle in which a small amount of hydrogen gas is diverted from the thrust nozzle, thus eliminating the need for a separate system to drive the turbine (NASA, 1963). 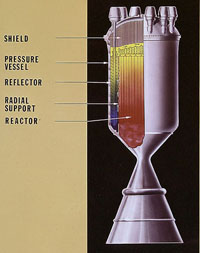 NERVA (Nuclear Engine for Rocket Vehicle Application) was an American rocket program, started in 1963, to develop a thermal nuclear propulsion system for use on long-range (lunar and interplanetary) manned space missions. The goal of the NERVA program was to take the graphite-based nuclear reactor built at Los Alamos Scientific Laboratory (LASL) under the Rover program, which had begun in 1956, and create a functioning rocket engine.

The NERVA and Rover programs, involving LASL, Westinghouse, Aerojet, and other industrial partners, ran in parallel and were impressively successful from a technological standpoint. One of the most notable demonstrations was a 12-min test of the Phoebus-2A reactor – the most powerful nuclear reactor ever built – which delivered over 4,000 megawatts of thermal energy. The NERVA/Rover programs were cancelled, however, in 1973, for a variety of reasons including environmental concerns, loss of public and political interest in a manned mission to Mars in the wake of Apollo, and the growing use low-cost unmanned, robotic space probes.

The Rover portion of the program began in 1955 when the US Atomic Energy Commission's LASL and the US Air Force set out with the goal of developing a nuclear engine for missile applications. However, in 1958, the newly created NASA inherited the Air Force responsibilities and the proposed engine became slated for use in advanced, long-haul space missions to the Moon and Mars. The NERVA portion of the project originated in 1960 and the industrial team of Aerojet General Corporation and Westinghouse Electric given responsibility for developing it. In the same year, NASA and the Atomic Energy Commission created the Space Nuclear Propulsion Office to manage project Rover/NERVA.

The idea was to recreate the success story of the AEC-Navy arrangement that had developed and built small power plants for the nuclear submarine and surface ship program. The AEC had the expertise and the sole authority in the US to oversee nuclear reactors for civilian use, and NASA would develop the rockets and spacecraft that would use the engines. NERVA came to be seen as an integral part in a proposed manned mission to Mars, which was at one time scheduled for launch in Nov 1981 with a manned landing in Aug 1982. The NERVA engine would have powered a RIFT (Reactor-In-Flight-Test) nuclear stage, for which the Marshall Space Flight Center had development responsibility. This nuclear-powered upper stage would have been fitted to the Saturn V, allowing the upgraded Saturn to launch interplanetary payloads. Between 1959 and 1972, the Space Nuclear Propulsion Office oversaw 23 reactor tests, all at the Nuclear Rocket Development Station at AEC's Nevada Test Site, in Jackass Flats, Nevada, about 160 km (100 mi) west of Las Vegas. The KIWI and Phoebus series, Peewee-1, and the Nuclear Furnace 1, all conducted by LASL on the Rover side of the program to prove concepts and test advanced ideas. Aerojet and Westinghouse tested their own series for use in the NERVA engine: NRX-A2 (NERVA Reactor Experiment), A3, EST (Engine System Test), A5, A6, and XE-Prime (Experimental Engine).

In the late 1960s and early 1970s, the Nixon Administration cut NASA and NERVA funding dramatically. Eventually the NERVA/Rover program lost its funding altogether, and was terminated on Jan 5, 1973.

The NERVA program started out with the following objectives:
multi-mission capability
man-rated
based on full-flow topping
minimum chamber temperature of 2360 K and a minimum chamber pressure of 450 psia
minimum 75,000 lbf thrust
endurance of 600 min and up to 60 cycles
capable of 85,000 lbf and 500 psia transients
incorporating adequate shielding for manned operations
storable for 5 yr on the ground, 6 mo on pad, and 3 yr in space
transportable by land, sea, and air To meet these objectives, NERVA consisted of two reactor projects: the Nuclear Reactor eXperiment (NRX) and the eXperimental flight Engine Prototype (XE-Prime).

By the time the NERVA program was terminated, the NERVA-2 had been designed that would have met all of the program's objectives. Two of these engines would have been fitted to a NERVA stage capable of powering a manned interplanetary spacecraft.