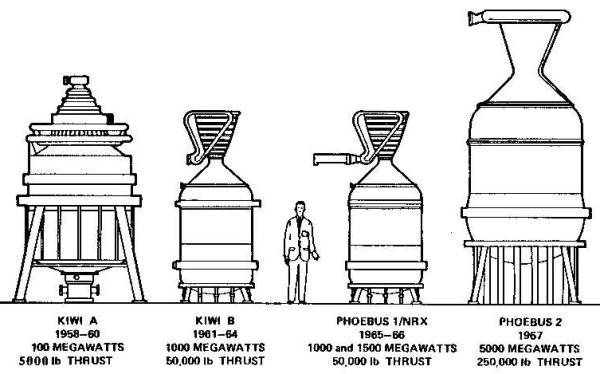 Comparison of the KIWI and Phoebus assemblies.

Phoebus was a series of nuclear reactors, designed and built in the 1960s as part of the Rover program, to meet the needs of an interplanetary mission (see nuclear propulsion), in particular a manned mission to Mars. The design requirements were a thrust of 250,000 lb, a specific impulse (Isp) of 840 sec, and a reactor power level of 5,000 MWt.

The Phoebus-1 series was intended to study increasing the reactor power density and proved successful. When the power density was increased still further in the Phoebus-2 series, however, cooling of the aluminum pressure vessel was found to be a limiting factor. The Phoebus series demonstrated: 1) basic core and fuel configuration technology, 2) control of rocket parameters over a wide range of operating conditions, 3) the niobium carbide-molybdenum (NbC-Mo) coating could protect the fuel elements from hydrogen corrosion, 4) a two-pass regeneratively-cooled support structure allows full core performance, and 5) large nozzles for nuclear thermal rocket application were feasible. Other reactors developed during the Rover program were KIWI, Peewee-1, and Nuclear Furnace 1.