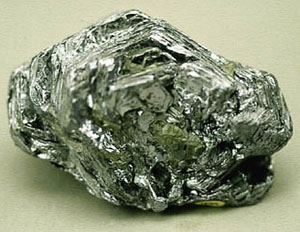 Molybdenite. Photo from MII, courtesy of the Smithsonian Institution.

Molybdenum (Mo) is a silver-white metallic element in group VIB of the periodic table; a transition element. It is obtained commercially by roasting molybdenite in air and reducing the oxide formed with carbon in an electric furnace or by the thermite process to give ferromolybdenum; a smaller amount of molybdenum is recovered from wulfenite and as a by-product or coproduct from copper mining.

Because of its high melting point, it is used to support the filament in electric lamps and for furnace heating elements. It also finds use in corrosion-resistant, high-temperature steels and alloys.

Molybdenum is unreactive, but forms various covalent compounds. Some are used as industrial catalysts. Molybdenum is a vital trace element in plants and a catalyst in bacterial nitrogen fixation.

Molybdenum was discovered by the Swedish scientist Peter Hjelm in 1781, three years after his compatriot Carl William Scheele proposed that a previously unknown element could be found in the mineral molybdenite. While studying molybdenite in 1778, Scheele at first thought he had identified lead in it (molybdenite is named after the Greek molybdos for lead). But Scheele's investigations led him to conclude that the did not contain lead, but a new element, molybdenum which he named after the mineral. The mineral scheelite (Ca(WO4,MoO4), calcium tungstate-molybdate) was later named in Scheele's honor.

Molybdenite is a soft, gray sulfide mineral (MoS2), the chief ore of molybdenum. It is found in pegmatites, igneous, and metamorphic rocks. It has hexagonal system tabular prisms, flakes, and fine granules and is lead-gray in color with a metallic luster. Hardness 1–1.5, relative density 4.7.

Purified molybdenite has properties very similar to those of graphite, and is used as a lubricant.