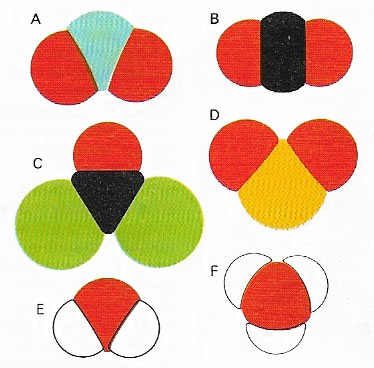 Fig 2. Covalently bonded molecules have individual molecular orbitals holding different atoms together, unlike the balanced geometric cluster of an ionic compound. Because of the forces of repulsion between the electron clouds surrounding adjacent nuclei, even small molecules have distinct shapes, which may differ quite markedly from one another as in the half-dozen common molecules here. (A) nitrogen dioxide, NO2. (B) Carbon dioxide, CO2. (C) Phosgene, COCl2. (D) Sulfur dioxide, SO2. (E) Water, H2. (F) Ammonia, NH3.

A covalent bond is a chemical bond formed when two atoms share two valence electrons, one contributed by each of the atoms (see Fig 1). Unlike ionic bonds, covalent bonds connect specific atoms and so can give rise to true, discrete molecules. Substances with covalent bonds – mostly organic compounds – tend to have low melting and boiling points and to be soluble in nonpolar solvents.

The electrons in a covalent bond are shared equally only when the atoms are identical. In most covalent bonds the electrons are held to a greater extent by one atom than by the other. See also electronegativity.

The covalent bond is the classical electron pair or homopolar bond of chemistry, particularly of organic chemistry. It is a strong bond: the bond between two carbon atoms in diamond, for example, has a cohesive energy of 7.3 eV with respect to separated neutral atoms. This is comparable with the bond strength in ionic crystals, in spite of the fact that the covalent bond acts between neutral atoms. The covalent bond has strong directional properties. Thus carbon, silicon, and germanium have the diamond structure, with atoms joined to four nearest neighbors at tetrahedral angles, even though this arrangement gives a low filling of space.

The shape of a covalently bonded molecule (Fig 2) depends on the shapes of the orbitals occupied by the electrons, both those involved in chemical bonding and any others in the outermost shells of the individual atoms. A water molecule, for example, in which two hydrogen atoms are each singly bonded to a central carbon atom, might be visualized as the three atoms joined in a straight line. Electrons, all being negatively charged, repel each other, so this in-line arrangement might seem best. It would mean that the volumes of electron probability around the two hydrogen atoms are as far apart from each other as they possibly could be, thus reducing repulsion to a minimum. But, in addition to the two electrons from the oxygen's outer shell, which are involved in bonding, there are four other electrons in this shell, situated as two 'lone pairs' in filled orbitals. Their effect on neighboring electron clouds has to be taken into account. When this is done it is found that a shape almost like that of one segment of a diamond is adopted. It is a tetrahedral structure in which the hydrogen atoms and the two pairs of oxygen electrons (not involved in bonding) all lie as far away from each other as possible.

Methane, in which one carbon atom is surrounded by four carbon atoms and all the outermost carbon electrons are involved in bonding, adopts a regular tetrahedral configuration. Intermediate in structure between methane and water is ammonia (NH3(, in which there are three nitrogen-hydrogen bonds and one filled orbital containing a lone pair of nitrogen electrons.

A covalent crystal is a type of crystal in which the atoms are held in the lattice by covalent bonds. Typical examples are diamond, silicon, and most organic crystals.