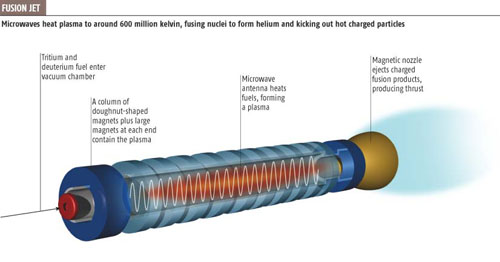 Microwave-induced fusion propulsion is a form of nuclear propulsion that would use microwaves to trigger fusion in a mixture of deuterium and tritium. The general idea of a fusion drive is to sustain an onboard fusion reaction and fire some of the energy created out the back of the spacecraft to generate thrust. However, harnessing fusion is not easy. The problem is to contain the super-hot plasmas of charged ions needed for fusion reactions.

To achieve fusion, the hydrogen isotopes deuterium and tritium have to be heated to at least 100 million kelvin. This strips electrons from the isotopes, creating a plasma of bare nuclei. If this plasma is hot and dense enough, the two types of nuclei fuse, giving off neutrons and huge amounts of energy. However, the plasma can only be contained by strong magnetic fields and it has proved very difficult to create containment fields that do not leak. Additionally, no one has yet managed to generate a stable fusion reaction that passes the break-even point where the reaction generates more energy than it takes to sustain it. Fortunately, in a fusion propulsion system (as opposed to one designed to produce electric power), the reaction doesn't need to go far beyond the break-even point to generate thrust. And containment is less of a headache because you actually want some of the plasma to escape. The problem is 100 million K is not hot enough to generate thrust. At that temperature, the fusion reaction only generates neutrons, which are uncharged and therefore cannot be steered and fired through a magnetic jet nozzle. To produce thrust, you need charged particles. This is where the scheme proposed by a team at Marshall Space Flight Center, led by William Emrich, comes in. Emrich's team has proposed using microwaves to heat the plasma to 600 million K, triggering a different kind of fusion reaction that generates not neutrons but charged alpha particles – helium nuclei. These can then be fired from a magnetic nozzle to push the craft along. Emrich and his colleagues have tested the idea with a scaled-down version using an argon plasma. They found that they could circumvent many of the containment problems by using a long, cylindrical magnetic field with powerful magnets at each end, as shown in the diagram. In a fusion drive, the fields at the end could easily be controlled to release the highly energetic alpha particles and propel the craft. Once fusion researchers have managed to achieve stable, break-even fusion, the team believes, a full-scale fusion drive – perhaps 100 m long – could be ready for use within two decades. By generating about 300 times the thrust of any chemical rocket engine and using only a fraction of its fuel mass, the system would allow the Earth-Mars journey time to be slashed from six months to less than six weeks. Moreover, it would enable missions to depart at any time without waiting for "shortest journey" launch windows.