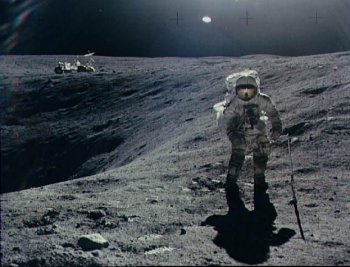 Charles Duke collecting samples on the rim of Plum Crater.

Apollo 16 was the tenth manned mission of the Apollo Project and the first to visit a highland region of the Moon. Apollo 16's flight went to plan until the Command and Service Module (CSM) and Lunar Module (LM) undocked in lunar orbit. Shortly after, the CSM began to move strangely due to an apparent problem in the craft's thruster controls. This required the CSM and LM to remain close together until the problem was fixed. The LM descended to the lunar surface almost six hours behind schedule and landed in the Descartes highlands just 230 m from the targeted landing area. At 5,500 m above lunar "sea level," this was the highest manned lunar landing.

During the first moonwalk the astronauts deployed the ALSEP (Apollo Lunar Science Experiment Package) and drove the Lunar Roving Vehicle (LRV) to Flag Crater. Unfortunately, Young tripped and fell over one of the leads attached to the ALSEP, rendering the experiment package useless. However, the day ended well for Young because during his excursion he learned that Congress had approved Fiscal Year 1973 funding for the Space Shuttle development, without which the program could have been canceled. Young, who later commanded the first Shuttle mission, jumped in the air – or, rather, the vacuum – when he heard the news. During the second moonwalk, the astronauts drove the LRV to Stone Mountain where they made observations and collected rock and soil samples. The third drive, to Smoky Mountain, was cut short because the water supply for cooling the LM's instrumentation was running low – more water than expected having been used during the delay before landing. In fact, the coolant ran out just moments after the LM and CSM re-docked. Several records were broken during the mission, including the highest speed by a vehicle on the lunar surface (21 km/h) and the largest crater yet visited by man – North Ray Crater, about 200 m deep and 1.5 km wide.