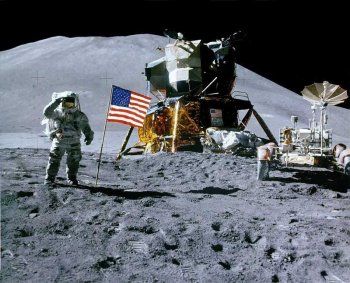 Apollo 15 Lunar Module on the Moon.

Apollo 15 was the ninth manned mission of the Apollo Project and the first extended-duration manned lunar mission. Falcon landed on the Moon in Hadley Rille near the base of the Apennines. Shortly after, David Scott stood in the Lunar Module (LM) upper hatch to photograph the landing area – a scheduled "standup spacewalk" to allow more detailed analysis of the surrounding terrain.

For the first time, the Lunar Roving Vehicle (LRV) was taken to the Moon and, following initial difficulties with deployment and steering, used for an excursion to St. George Crater. Scott and James Irwin drove the LRV a total of 10 km before returning to set up the ALSEP (Apollo Lunar Science Experiment Package).

During their second outing the astronauts made a 12-km round-trip to Mount Hadley Delta and found a green crystalline rock, later called the "Genesis Rock" because of its presumed great age. On their third excursion, Scott and Irwin drove to Scarp Crater and Hadley Rille and became the first astronauts to venture beyond the LM's field of view. A feather was dropped during the mission alongside a hammer to illustrate in dramatic style one of Galileo's most significant findings. Sure enough, the feather and hammer hit the Moon's surface simultaneously.

For the first time, the liftoff of the LM was photographed by a remotely-operated TV camera on the surface. The empty LM was again crashed into the Moon following undocking to measure the impact with seismometers. Also for the first time, a scientific subsatellite was released into lunar orbit from the CSM; it transmitted data back to Earth for the next year. On the return journey, while about 275,000 km from Earth, Alfred Worden went on a 41-min spacewalk during which he was attached to the CSM by a tether – the most distant EVA up to that time. During it, Worden used handrails and foot restraints to complete three trips to and from the Scientific Instrument Module (SIM) bay on the side of the SM.

During re-entry and descent, one of the three parachutes failed to open fully. As a result, descent velocity was 4.5 km/h (2.8 mph) faster than planned.