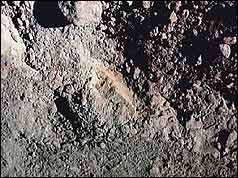 Apollo 17 was the eleventh and final manned mission of the Apollo Project, and the sixth to land on the Moon.

Apollo 17 was also the first American manned launch in darkness. Lunar Module Challenger landed in the Taurus-Littrow Valley of the Sea of Serenity, a location chosen because a landslide had recently (in geological terms) occurred here, bringing down material from the heights of the nearby Taurus Mountains.

As with Apollo 16, the first steps onto the Moon were not televised; however, in this case the blackout was planned – the camera gear for recording the first lunar steps having been dispensed with to save weight. During the first of three moonwalks, Eugene Cernan and Schmitt planted an American flag that had hung in Mission Control since Apollo 11. They also deployed the most advanced ALSEP (Apollo Lunar Science Experiment Package) of the Apollo program and drove the Lunar Roving Vehicle (LRV) to Steno Crater.

On their second excursion – the longest on the Moon to date – the astronauts drove a round-trip of 19 kilometers to South Massif. The final outing, and the last by an Apollo crew, took them to North Massif.

Numerous records were set on the mission, including the first flight of a scientist-astronaut – geologist Schmitt – who had been selected by NASA with no prior piloting skills. The Apollo 17 LM and crew logged the longest stay on the Moon, the Apollo 17 CSM completed the most lunar orbits at 75, setting a record manned lunar orbit stay of 147 h 48 min, and Cernan and Schmitt logged the longest total excursion time on the Moon at 22 h 5 min. The Apollo 17 LRV also logged the most distance driven on the lunar surface (a total of 35 km), and a record amount of lunar rock and soil samples was collected and returned to Earth. The last human lunar explorers – to date – left the Moon at 22:45 GMT on December 14, 1971. An economic recession and waning public interest in the Moon led to the cancellation of Apollo 18, 19, and 20, although Apollo hardware did fly again, during the Apollo-Soyuz Test Project and the Skylab missions.