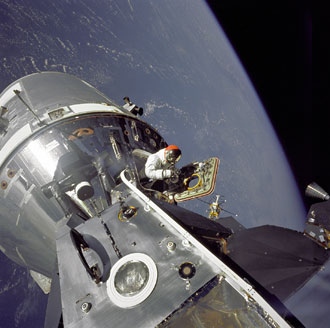 David Scott stands in the open hatch of the Apollo 9 Command Module.

Apollo 9 was the third manned flight of the Apollo Project and the first flight of all three main Apollo vehicle elements – Saturn V, Command and Service Module (CSM), and Lunar Module (LM).

Following insertion into low Earth orbit (LEO), the Apollo 9 CSM separated from the Saturn IVB upper stage, turned around, docked with the LM, and removed it from the spacecraft lunar adapter. Astronauts James McDivitt and Russell Schweikart then boarded the LM, undocked it, and flew it independently for over six hours at distances up to 160 km from the CSM. The LM descent stage was jettisoned and left behind in LEO, eventually to burn up in the atmosphere.

After the CSM and LM ascent stage redocked, two spacewalks were carried out. McDivitt and Schweickart entered the LM while David Scott remained aboard the CSM, and the CSM and LM were both depressurized. The LM hatch was opened, and Schweickart exited, remaining attached to the spacecraft by a foot restraint dubbed the "golden slipper" because of its gold exterior, and retrieved two experiments from outside the LM. The main purpose of the walk was to test the special spacesuit, known as the EMU (extravehicular mobility unit), and backpack, or PLSS (Portable Life Support System), to be used during the Moon landings. This was the first time an astronaut had ventured into the vacuum of space free of capsule-based life support equipment. During the second spacewalk, Scott opened the CSM hatch while attached to a life-support umbilical line to demonstrate the ability to prepare for emergency transfer of astronauts between the LM and CSM should a docking prove impossible once the LM had left the Moon (see photo above).

Although the spacewalks were scheduled to take up to two hours, they were shortened to just 46 min because all three astronauts had suffered space sickness earlier in the mission. The LM ascent stage was jettisoned and its engine fired by remote control, placing the craft in a high elliptical orbit. Following separation of the CM and SM, the CM reentered and splashed down.