The Earth seen from Apollo 8 in lunar orbit. 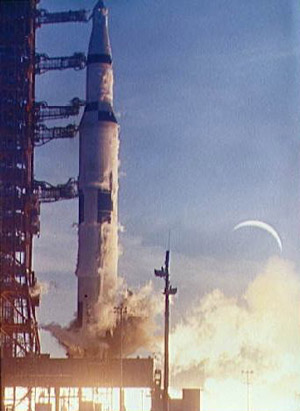 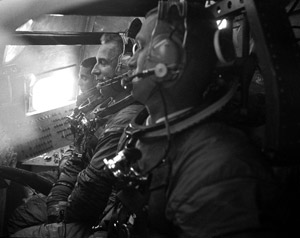 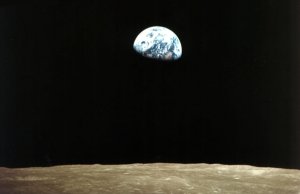 Earth seen above the Moon's horizon from Apollo 8.

Apollo 8 was the second manned flight of the Apollo Project, the first manned flight to orbit the Moon, and the first manned launch of the Saturn V rocket. Originally intended as simply an Earth-orbit test mission, Apollo 8 evolved into an ambitious circumlunar flight at a time when rumors suggested a possible Soviet attempt at a manned orbit of the Moon (see Russian manned lunar programs).

The three astronauts of Apollo 8 became the first human beings to achieve Earth escape velocity and the first to see in person both the farside of the Moon and the whole of our planet from space. During 10 lunar orbits, the crew took star sightings to pinpoint landmarks, surveyed landing sites, took still and motion pictures, and made two TV transmissions in the course of one of which, on Christmas Eve, passages were read from the Book of Genesis. At 1:10 am EST on Christmas Day 1968, while on the Moon's farside, the Service Module's main engine was fired to take the spacecraft out of lunar orbit. As the crew began its return to Earth, James Lovell remarked, "Please be informed ... there is a Santa Claus." Apollo 8 achieved another first when it splashed down in darkness.