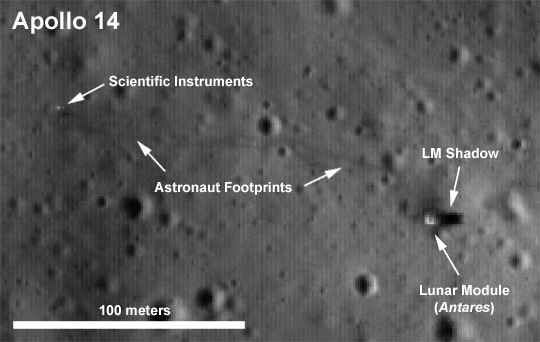 Apollo 14 landing site imaged from orbit by the Lunar Reconnaissance Orbiter. Visible is the descent stage of the Lunar Module (and shadow), science instruments, and "rickshaw" tracks.

Apollo 14 was the eighth manned mission of the Apollo Project and the third to reach the surface of the Moon. Launch of Apollo 14 was postponed about three months to allow changes to the flight plan and hardware following the experience of Apollo 13.

The outbound flight went to plan, although it took six attempts to successfully dock the Command and Service Module (CSM) and the Lunar Module (LM). Antares landed on the Moon just 27 m from its target point in the Fra Mauro highlands. During two moonwalks Alan Shepard and Edgar Mitchell collected rock and soil samples, and deployed the ALSEP (Apollo Lunar Science Experiment Package), a communications antenna, and a color TV camera.

For the first time, an astronaut wore a spacesuit that was color-coded. The Apollo 12 astronauts had difficulty telling who was whom when they reviewed photos taken on the Moon. NASA subsequently decided to place distinguishing marks on one of the spacesuits; Shepard wore red stripes at the knees and shoulders and on the helmet.

During the second moonwalk, the astronauts covered about 3 km traveling to and from the rim of Cone Crater. For the first time, a MET (Modularized Equipment Transporter), nicknamed the "rickshaw," was deployed. Resembling a wheelbarrow, it was used mainly to carry tools, photographic equipment, and rock and soil samples. However, as it became more full it tended to tip over so that the astronauts resorted to carrying instead of pushing it. This was the first moonwalk during which astronauts were equipped with Buddy Life Support Systems so that they could share life-support from one pack in an emergency. Shepard had the distinction of playing the first golf shots on the Moon. With a golf club head fixed to a metal rod, he struck one ball about 180 m and another about twice as far.

While Shepard and Mitchell were on the surface, Stuart Roosa became the first CSM pilot to carry out extensive onboard experiments from lunar orbit. Concurrent with Apollo 14, the Russian Lunokhod 1 probe, operated by remote ground commands, was exploring another part of the lunar surface. The return to Earth went according to plan, and the CM splashed down just 1.5 km from its intended recovery point. See also "Moon trees".