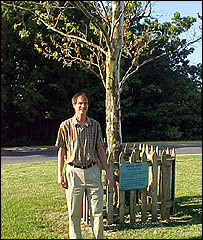 'Moon trees' are trees that have been grown from seeds which traveled to the Moon and back on board Apollo 14 in 1971. The seeds were germinated and planted as part of the US bicentennial celebrations in 1976. It was the Apollo Command Module pilot Stuart Roosa's love of the outdoors that prompted him to choose tree seeds as one ingredient of his Personal Preference Kit, the sock-sized pouch that Apollo astronauts were allowed to fill with their prize possessions. The seeds were provided by the US Forestry Service – in particular, by its then Staff Director for Forest Genetics Research, Stan Krugman.

The scientific purpose behind the Moon trees project was to to see whether exposure to space, in particular the harsh radiation, would have any effect on the seeds. Constraints on weight and volume meant only around 500 seeds made the journey. The first attempt to germinate a few of them by NASA scientists at Houston failed, so it was decided that perhaps they were all dead. However, Krugman asked to be sent the remaining specimens. At various institutions around the US, in the care of plant scientists, all the remaining seeds germinated and grew into saplings. Each of the Moon Trees has an earthbound twin, derived from the same set of parents. Krugman and his colleagues compared those which had made the journey with their terrestrial twins and found no change. During the bicentennial celebrations of 1976, when the Moon Trees were a sturdy five years old, requests came from all over the nation for saplings. Demand outstripped supply, so Krugman created second-generation saplings – the offspring of a Moon Tree and an earthly specimen, but still requests kept on coming, from abroad as well as home.

Any record of who asked for Moon Trees and who got them appears to have vanished. However, for $32 plus postage and packing, anyone can now buy their own second- or even third-generation Moon Tree from the conservation group American Forests as part of its Historic Trees program, providing that legislation on importing seeds into the country in question is allowed.