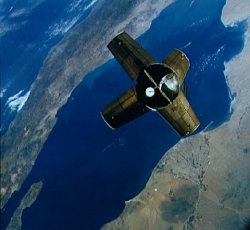 Apollo 7 was the first manned flight in the Apollo Project. It was launched by a Saturn IB (unlike all subsequent Apollo missions which used the Saturn V), conducted in Earth orbit, and devoted to testing guidance and control systems, spacesuit design, and work routines. During rendezvous and station-keeping operations, the Command and Service Module (CSM) approached to within 21 m of the spent Saturn IVB stage that had boosted the spacecraft into orbit. A Lunar Module was not flown on this mission.

The Apollo 7 mission spent more time in space than all the Soviet space flights combined up to that time.