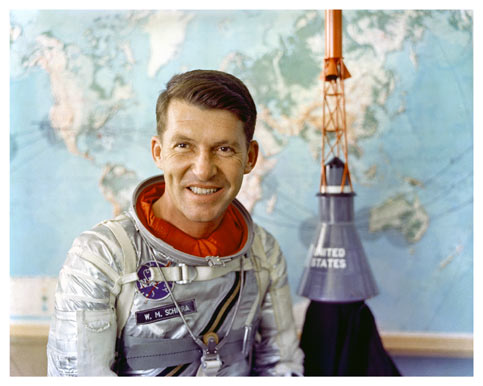 Walter Schirra alongside a model of the Mercury capsule. 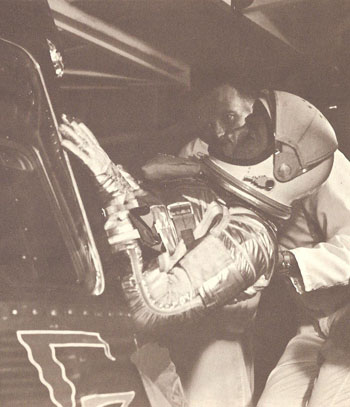 Walter ('Wally') Schirra was the only American astronaut to fly in all three Mercury, Gemini, and Apollo programs. Schirra earned a BS from the United States Naval Academy in 1945 and later flew combat missions during the Korean War. He was involved in the development of the Sidewinder missile at the Navy Ordnance Station at China Lake, California. Flying an F3D night fighter, Schirra was the first to fire a Sidewinder at a drone target – with almost disastrous results. The missile went out of control and started to loop around to chase the plane; Schirra's response was to make an even faster loop to stay on its tail. He flew the Mercury capsule Sigma 7 to become the third American in space, commanded Gemini 7 which made the first space rendezvous, and commanded Apollo 7.

Walter Schirra was born at Hackensack, New Jersey on March 11, 1923. Schirra's father was a World War I ace in the Army Air Corps, and following the war he and his wife barnstormed throughout the United States in a light plane.

He had service on board the battle cruiser Alaska, on the staff of the Seventh Fleet, flight training at Pensacola, Florida, Naval Air Station, in Navy Fighter Squadron 71, and as an exchange pilot with the 154th Fighter Bomber Squadron. He went with that squadron to Korea where he flew 90 combat missions in F-84E aircraft.

Schirra flew F3H-2N Demons as Operations Officer at Fighter Squadron 124 on board the carrier Lexington in the Pacific. He then attended Naval Air Safety Officer School at the University of Southern California, followed by test pilot training at the Naval Air Test Center, Patuxent, Maryland.

His last assignment, prior to being chosen a Project Mercury astronaut, was at Patuxent in suitability development work on the F4H. In total he logged more than 3,200 hr of flying time including more than 2,000 hr in jet aircraft.

At 7.15 am, October 3, 1962, Wally Schirra, in his Sigma 7 capsule, was launched into space, boosted by an Atlas launch vehicle which developed 360,000 lb of thrust. Six orbits and 9 hr and 13 min later he splashed down in the Pacific about 295 miles northeast of Midway Island – less than 5 mi from the target set prior to the 160,000-miles journey into space.

The flight itself, termed by Schirra after his return to the United States a "textbook flight," followed a plan which was actually a compilation of input of engineering, operations, and medical personnel, integrated into a single plan, and accepted and carried out by Schirra.

Principal benefits from the six-orbit mission were the development of operational techniques and procedures which are directly applicable to manned one-day missions. Schirra maintained a close check on the environmental control system, and, according to him, the pilot control of the systems in an effort to control use of fuel was proven and suit temperature no longer presented a problem.

Another benefit was the experience with the attitude control with changes incorporated in the MA-8 flight. Both the low thrusters (one-pound) and high thrusters (24-lb) performed perfectly when called upon by the pilot.

Schirra went through a period of more than nine hours of weightlessness without nausea or other ill-effects. His flight provided invaluable information concerning the extended phases of drifting flight which would be used extensively in the one-day mission.

Project Mercury, as a result of information gathered from schirra's flight, the preceding three-orbit flights of astronaut's John H. Glenn, Jr., and M. Scott Carpenter, and the sub-orbital flights of Alan B. Shepard, Jr. and Virgil I. Grissom, was now ready to move onward to its last planned phase of the investigation of space – manned one-day missions.