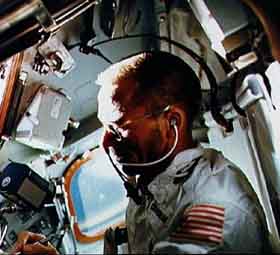 Walter Cunningham is a retired American astronaut who served as Lunar Module pilot on the first manned Apollo mission, Apollo 7 – an 11-day Earth-orbital flight in October 1968. Cunningham joined the United States Navy in 1951 and served with the Marine Corps until 1956 and the Marine Corps Reserve program until 1975. Having received a BA in physics in 1960 and an MA in physics in 1961 from the University of California, Los Angeles, he worked as a scientist with the RAND Corporation before being selected as an astronaut in October 1963. Cunningham retired from NASA in 1975 and two years later wrote The All-American Boys about his experiences as an astronaut. He is currently president of Acorn Ventures, Inc.