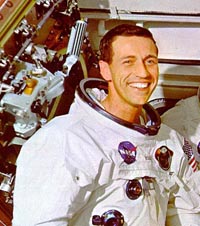 Donn Eisele was an American astronaut and Air Force colonel involved with the Apollo program. Eisele was selected as an astronaut in October 1963, and served as Command Module (CM) pilot on Apollo 7 and backup CM pilot for Apollo 1 and 10. He received a BS from the United States Naval Academy in 1952 and a MS in astronautics from the Air Force Institute of Technology in 1960. After earning his wings in 1954, he flew as an interceptor pilot for four years before attending the Air Force Institute of Technology at Wright-Patterson Air Force Base. After graduating, he worked there as a rocket propulsion and aerospace weapons engineer from 1960 to 1961, attended the Aerospace Research Pilot School, and then worked as a project engineer and experimental test pilot at the Air Force Special Weapons Center at Kirtland Air Force Base. As an astronaut, Eisele was assigned to pilot the first manned Apollo flight but broke his shoulder during training and was replaced by Roger Chaffee. The accident saved his life because Chaffee, along with Virgil Grissom and Edward White died in a launch-pad fire during a rehearsal for the mission. Eisele resigned from NASA's Astronaut Office in 1970 and became the technical assistant for manned spaceflight at the Langley Research Center, a position he occupied until his retirement from both NASA and the Air Force in 1972.