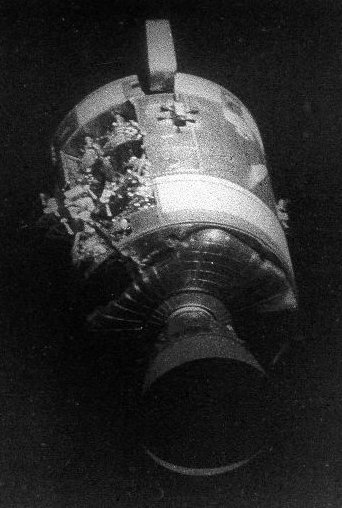 Apollo 13 was the seventh manned mission of the Apollo Project and one that nearly ended in disaster. For the superstitious: Apollo 13 was launched on schedule at 13:13 Houston time, April 11, 1970. On April 13, while en route to the Moon, an oxygen tank in the Service Module (SM) exploded. The crew got home safely thanks to the consumables and propulsion system of the Lunar Module (LM), and the ingenuity of ground controllers in improvising LM lifeboat procedures.

The S-IVB stage that boosted the mission into translunar trajectory was delivered to Kennedy Space Center on June 13, 1969 – a Friday. Swigert replaced Thomas Mattingly as Command Module (CM) pilot after Mattingly contracted measles (the only preflight substitution of this kind in the history of the American space program).

Following liftoff, the second stage S-II booster's center engine cut off 132 sec early. To compensate, the four remaining S-II engines burned an extra 34 sec, and the S-IVB third stage burned an extra 9 sec. The flight continued according to plan. For the first time, the S-IVB third stage was fired on a lunar trajectory following spacecraft separation and struck the Moon, so that the resulting moonquake could be measured, at a point about 137 km from the seismometer planted by the Apollo 12 astronauts. Unfortunately, the S-IVB would be the only part of Apollo 13 to reach the lunar surface.

About 56 hr after liftoff and more than halfway to the Moon, a spark and resulting fire ruptured the Number Two Oxygen Tank in the Service Module section of the CSM causing a violent explosion. This resulted in the loss of all fuel-cell-generated electricity and led to many other complications, including a complete loss of oxygen and water supply from the CSM. The mission was immediately aborted and all efforts shifted to the safe return of the crew. The CSM was powered down, and the crew moved to the LM for the bulk of the return flight. Not wishing to risk complicated maneuvers to turn the spacecraft around, NASA directed Apollo 13 to proceed around the Moon. Virtually all spacecraft systems were shut down to conserve power. The crew squeezed into the LM which was designed to support two astronauts for about 50 hr but now needed to support all three astronauts for four days. The crew endured temperatures at or below freezing for the bulk of the return flight as well as other hardships, including water rationed at 170 grams per astronaut per day.

After circling the Moon once, the LM descent engine was fired twice to establish a fast return path. Nearing Earth, Swigert returned to the CSM to power up the craft using onboard batteries. Engineers were not certain that power could be restored due to low temperatures during the flight; however, sufficient power was restored without difficulty. Swigert jettisoned the SM while Lovell and Haise remained aboard the LM. Following jettison, the crew viewed and took dramatic pictures of the explosion's aftermath: an entire side of the SM had been blown out. Eventually, Lovell and Haise joined Swigert on the CM, the LM, which had successfully served as a lifeboat, was jettisoned, and the CM reentered Earth's atmosphere. Under such circumstances, no one knew if the CM would come in at the proper angle to avoid burning up in or skipping off the atmosphere. As in all previous American manned spaceflights, there was a communications blackout of several minutes during reentry. Then, to the cheers of an anxious world, Apollo 13 splashed down within sight of the recovery team and the crew were rescued about one hour later.