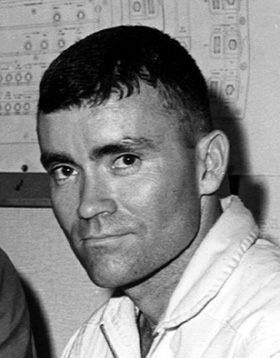 Fred Haise is a retired American astronaut who served as Lunar Module pilot on the ill-fated Apollo 13 mission. Haise received a BS in aeronautical engineering from the University of Oklahoma in 1959 and joined the Navy in 1962, subsequently serving as a fighter pilot in the Oklahoma National Guard. He was the Aerospace Research Pilot School's outstanding graduate of Class 64A and served with the Air Force in 1961-62 as a tactical fighter pilot. NASA then tapped him as a research pilot at its Flight Research Center at Edwards, California, and at its Lewis Research Center. Haise was one of 19 selected by NASA in its fifth class of astronauts in April 1966. He was backup Lunar Module pilot for Apollo 8 and Apollo 11 before being named to that slot on Apollo 13. From 1973 to 1976, Haise was technical assistant to the manager of the Space Shuttle Orbiter Project. He was commander of one of the two-man crews which piloted Shuttle approach and landing test flights in 1977. These flights evaluated the Shuttle's capabilities after the test ship Enterprise was released from the back of a Boeing 747 jet above the California desert. Haise retired from NASA in June 1979 and held several managerial positions with Grumman Aerospace Corporation before retiring in 1996.