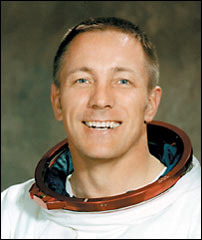 John Swigert was an American astronaut who served as Command Module pilot on Apollo 13.

Swigert received a BS in mechanical engineering from the University of Colorado in 1953 and a MS in aerospace science from Rensselear Polytechnic Institute in 1965. Having served with the Air Force (1953–1956) and as a jet fighter pilot with the Connecticut Air National Guard (1960–1965), he became one of 19 astronauts selected by NASA in 1966. He served as a member of the astronaut support crews for Apollo 7 and Apollo 11, and was assigned to the Apollo 13 backup crew before replacing prime crewman Thomas Mattingly as command module pilot 24 hours prior to flight following Mattingly's exposure to German measles. From April 1973 to September 1977, Swighert served as executive director of the Committee on Science and Technology in the House of Representatives. In 1978, he ran unsuccessfully for the United States Senate. After several years in business, he ran for Congress and, in November 1982, won the new seat for Colorado's 6th congressional District. Swigert died of complications from cancer on 27 December 1982, a week before he was due to take up office. He was the first circumlunar astronaut to die.