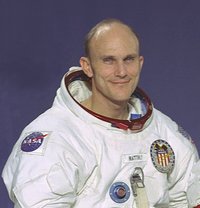 Thomas Mattingly is a veteran American astronaut involved in both the Apollo and Space Shuttle programs. Mattingly received a BS in aeronautical engineering from Auburn University in 1958 and subsequently flew carrier-based aircraft. Selected by NASA in Apilr 1966, he served as a member of the astronaut support crews for the Apollo 8 and Apollo 11 missions and was the astronaut representative in development and testing of the Apollo spacesuit and backpack. Although designated as the Command Module pilot for Apollo 13, he was removed from flight status 72 hours before the scheduled launch because of exposure to German measles. Mattingly subsequently served as Command Module pilot of Apollo 16, head of astronaut office support to the Space Shuttle program from January 1973 to March 1978. He was next assigned as technical assistant for flight test to the Manager of the Orbital Flight Test Program. From December 1979 to April 1981, he headed the Astronaut Office ascent/entry group. He subsequently served as backup commander for STS-2 and STS-3, Columbia's second and third orbital test flights. Mattingly was commander for the fourth and final orbital test flights of the Shuttle Columbia (STS-4) on June 27, 1982, and also commander for the first Department of Defense (DoD) mission to be flown aboard Shuttle 51C and as the Head of the Astronaut Office DoD Support Group from June 1983 through May 1983.