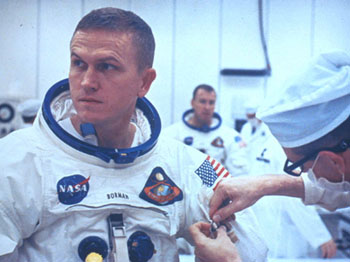 Frank Borman is a retired American astronaut, selected by NASA in 1962, who commanded the Gemini 7 and Apollo 8 missions. He received a BS from West Point in 1950 and a MS from the California Institute of Technology in 1957. From 1950 to 1970, Borman was a career Air Force officer serving as a fighter pilot in the Philippines, an operational pilot and instructor with various squadrons in the United States, an assistant professor of thermodynamics and fluid dynamics at West Point, and an experimental test pilot at the Air Force Aerospace Pilot School. After leaving NASA in 1969, Borman joined Eastern Airlines and rose to become chairman of its board in 1976. He later served as an official of the Patlex Corporation.