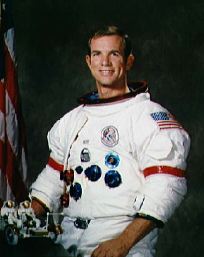 David Scott is a retired American astronaut who was the pilot on Gemini 8, Command Module pilot on Apollo 9, and commander of Apollo 15. Scott received a BS from the United States Military Academy in 1954 and a MS in aeronautics and astronautics from the Massachusetts Institute of Technology in 1962. He entered the Air Force and graduated from the Experimental Test Pilot School and Aerospace Research Pilot School at Edwards Air Force Base before being selected by NASA as an astronaut in 1963. Later, he held Administrative posts with NASA, including director of the Dryden Flight Research Center. Scott retired from the Air Force in 1975 as a colonel and is currently president of Scott Science and Technology, Inc.