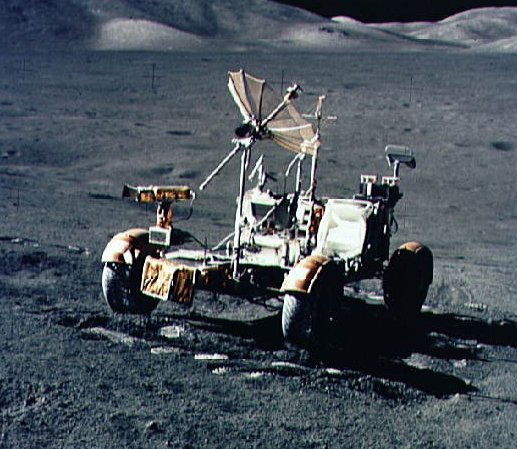 The Apollo Lunar Roving Vehicle (LRV), or lunar rover, was an electric vehicle designed to operate in the low-gravity vacuum of the Moon and to be capable of traversing the lunar surface, allowing the Apollo astronauts to extend the range of their surface extravehicular activities.

The Lunar Roving Vehicle had a mass of 210 kg and was designed to hold a payload of an additional 490 kg on the lunar surface. The frame was 3.1 m long with a wheelbase of 2.3 m. The maximum height was 1.14 m. The frame was made of aluminum alloy 2219 tubing welded assemblies and consisted of a three-part chassis which was hinged in the center so it could be folded up and hung in the Lunar Module quad 1 bay. It had two side-by-side foldable seats made of tubular aluminum with nylon webbing and aluminum floor panels. An armrest was mounted between the seats, and each seat had adjustable footrests and a Velcro seat belt. A large mesh dish antenna was mounted on a mast on the front center of the rover. The suspension consisted of a double horizontal wishbone with upper and lower torsion bars and a damper unit between the chassis and upper wishbone. Fully loaded the LRV had a ground clearance of 36 cm.

The wheels consisted of a spun aluminum hub and an 81.8 cm diameter, 23 cm wide tire made of zinc coated woven 0.083 cm diameter steel strands attached to the rim and discs of formed aluminum. Titanium chevrons covered 50% of the contact area to provide traction. Inside the tire was a 64.8 cm diameter bump stop frame to protect the hub. Dust guards were mounted above the wheels. Each wheel had its own electric drive, a DC series wound 0.25 hp motor capable of 10,000 rpm, attached to the wheel via an 80:1 harmonic drive, and a mechanical brake unit. Maneuvering capability was provided through the use of front and rear steering motors. Each series wound DC steering motor was capable of 0.1 hp. Both sets of wheels would turn in opposite directions, giving a steering radius of 3.1 meters, or could be decoupled so only one set would be used for steering. Power was provided by two 36-V silver-zinc potassium hydroxide non-rechargeable batteries with a capacity of 121 amp-hr. These were used to power the drive and steering motors and also a 36 V utility outlet mounted on front of the LRV to power the communications relay unit or the TV camera. Passive thermal controls kept the batteries within an optimal temperature range.

A T-shaped hand controller situated between the two seats controlled the four drive motors, two steering motors and brakes. Moving the stick forward powered the LRV forward, left and right turned the vehicle left or right, pulling backwards activated the brakes. Activating a switch on the handle before pulling back would put the LRV into reverse. Pulling the handle all the way back activated a parking brake. The control and display modules were situated in front of the handle and gave information on the speed, heading, pitch, and power and temperature levels. Navigation was based on continuously recording direction and distance through use of a directional gyro and odometer and inputting this data to a computer which would keep track of the overall direction and distance back to the LM. There was also a Sun-shadow device which could give a manual heading based on the direction of the Sun, using the fact that the Sun moved very slowly in the sky. The image at left shows a diagram of the layout of the control and display module, the Sun-shadow device is at top center between the heading and speed readouts.

Deployment of the LRV from the LM quad 1 by the astronauts was achieved with a system of pulleys and braked reels using ropes and cloth tapes. The rover was folded and stored in quad 1 with the underside of the chassis facing out. One astronaut would climb the egress ladder on the LM and release the rover, which would then be slowly tilted out by the second astronaut on the ground through the use of reels and tapes. As the rover was let down from the bay most of the deployment was automatic. The rear wheels folded out and locked in place and when they touched the ground the front of the rover could be unfolded, the wheels deployed, and the entire frame let down to the surface by pulleys. The rover components locked into place upon opening. Cabling, pins, and tripods would then be removed and the seats and footrests raised. After switching on all the electronics the vehicle was ready to back away from the LM. The image at right shows an earlier version of the planned deployment which does not exactly match the final sequence, note for example that the rover is facing away from the LM after deployment.

The original cost-plus-incentive-fee contract to Boeing (with Delco as a major sub-contractor) was for $19 million and called for delivery of the first LRV by 1 April 1971, but cost overruns led to a final cost of $38 million. Four lunar rovers were built, one each for Apollos 15, 16, and 17, and one that was used for spare parts after the cancellation of further Apollo missions. There were other LRV models built: a static model to assist with human factors design, an engineering model to design and integrate the subsystems, two 1/6 gravity models for testing the deployment mechanism, a 1-gravity trainer to give the astronauts instruction in the operation of the rover and allow them to practice driving it, a mass model to test the effect of the rover on the LM structure, balance and handling, a vibration test unit to study the LRV's durability and handling of launch stresses, and a qualification test unit to study integration of all LRV subsystems. The LRV was developed in only 17 mo and yet performed all its functions on the Moon with no major anomalies. Harrison Schmitt of Apollo 17 said, "....the Lunar Rover proved to be the reliable, safe and flexible lunar exploration vehicle we expected it to be. Without it, the major scientific discoveries of Apollo 15, 16, and 17 would not have been possible; and our current understanding of lunar evolution would not have been possible." 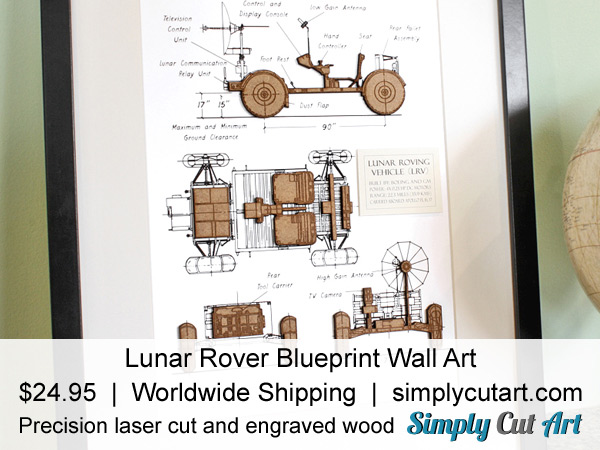