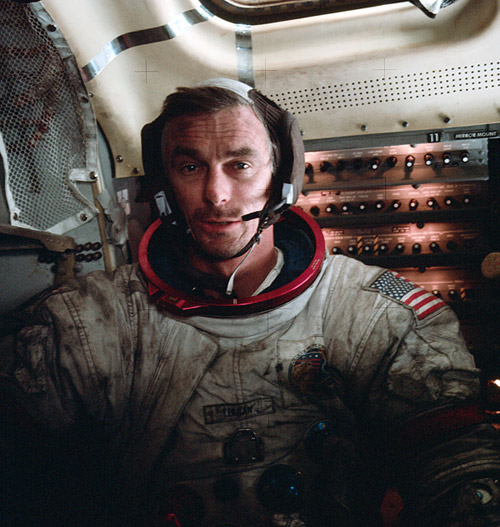 Eugene Cernan was an American astronaut, one of 14 selected in Oct 1963, and a career naval aviator. Cernan received a BS in electrical engineering from Purdue University and a MS in aeronautical engineering from the Naval Postgraduate School in 1964. He was a CapCom (Capsule Communicator) during the joint Gemini 7/Gemini 6A mission and became the pilot of Gemini 9 following the death of a prime crew member. He was also backup pilot for Gemini 12, backup Lunar Module pilot for Apollo 7, Lunar Module pilot for Apollo 10, backup commander for Apollo 14, and commander for Apollo 17, becoming the eleventh and (so far) penultimate person to step onto the Moon's surface and the last to leave his footprints there. Afterward he served as special assistant to the manager of the Apollo-Soyuz Test Project, before resigning from NASA and the Navy on July 1, 1976, to become an executive of Coral Petroleum, Inc. of Houston, Texas. Later he headed the Cernan Corporation in Houston.


Quote by Cernan on stepping on the Moon

"I'm on the surface; and, as I take man's last step from the surface, back home for some time to come – but we believe not too long into the future – I'd like to just (say) what I believe history will record. That America's challenge of today has forged man's destiny of tomorrow. And, as we leave the Moon at Taurus-Littrow, we leave as we came and, God willing, as we shall return, with peace and hope for all mankind. Godspeed the crew of Apollo 17."