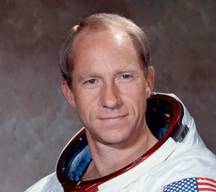 Alfred Worden is a retired American astronaut, one of 19 selected by NASA in April 1966, who served on the support crew of Apollo 9, on the backup crew of Apollo 12, and as Command Module pilot of Apollo 15. Worden attended the Military Academy at West Point, graduating in 1955. From 1955 to 1961 he was a Fighter Pilot and Armament Officer with the 95th FIS, Andrews Air Force Base, Maryland. He became the Chief of the Systems Studies Division at the Ames Research Center in 1972, which he held until 1975. Worden worked as a consultant to the Northwood Institute and the State of Florida, 1975–82, and later held executive positions with Maris-Worden Aerospace, Jet Electronics and Technology and BF Goodrich Corporation before retiring in 1996.