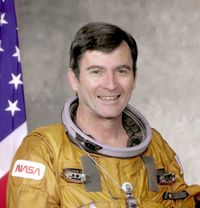 Born in San Francisco, Young received a BS in aeronautical engineering from Georgia Institute of Technology in 1952 before joined the Navy. He served on a destroyer for a year, then took flight training and was assigned to Fighter Squadron 103 for four years, flying Cougars and Crusaders. After training at the Navy Test Pilot School in 1959, he was assigned to the Naval Air Test Center for three years, setting time-to-climb records in a Phantom jet. He was later maintenance officer of Phantom Fighter Squadron 103 and retired from the Navy as a captain in 1976. Young was selected as an astronaut in 1962 and flew with Grissom on the first manned Gemini mission, Gemini 3, in 1965. During five hours in orbit, they accomplished several firsts for a manned spacecraft: changing the orbital path, operating a computer and lifting reentry. On Gemini 10, in 1966, Young and Michael Collins executed a dual rendezvous with two separate Agena satellites. On Apollo 10, in 1969, Young operated the Command Module while Thomas Stafford and Gene Cernan flew the separated lunar module to within 10 mi of the Moon. Young commanded Apollo 16, in 1972, with Charlie Duke and Ken Mattingly. Young and Duke explored the lunar highlands at Descartes, drove a lunar rover 16 mi and collected 90 kg of moon rocks. Young's fifth flight was as commander of the first Space Shuttle mission, STS-1, on Apr 12, 1981, a 54.5-hr flight during which he and Crippen thoroughly tested the first reusable winged spacecraft. They guided Columbia to the first runway landing of a manned spaceship. Young was back in space aboard Columbia for the STS-9 mission, Nov 28 to Dec 8, 1983, with pilot Brewster Shaw, Bob Parker, Owen Garriott, Byron Lichtenberg and West German Ulf Merbold. In a Spacelab module in the cargo bay, the crew conducted science, metals processing and life sciences experiments. In 1973, Young was named Chief of the Space Shuttle Branch of the Astronaut Office. The following year, he was selected Chief of the Astronaut Office. He later served as the Associate Director (Technical) at Johnson Space Center.