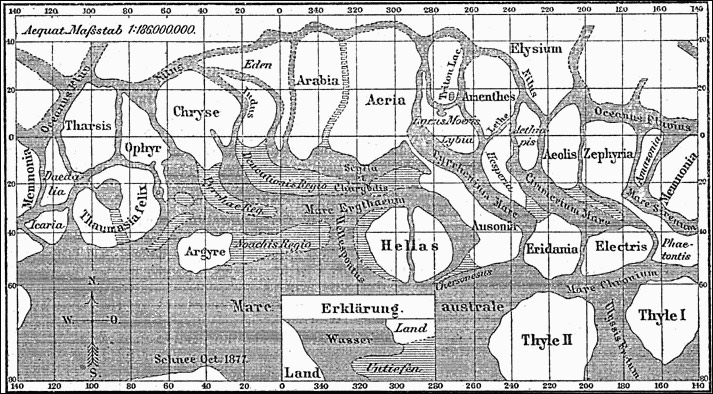 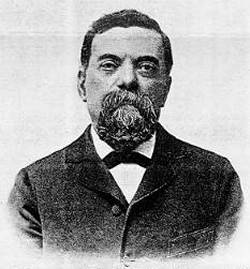 Map of Mars by Schiaparelli based on observations during six oppositions between 1877 and 1888.

Giovanni Schiaparelli was a prolific Italian astronomer whose research ranged widely but whose name is forever associated with Mars, and the controversy over the Martian "canals" which, unwittingly, he helped to unleash. Born in Savigliano, Piedmont, Schiaparelli graduated from the University of Turin and studied at the Royal Observatory in Berlin under Johann Encke, discoverer of a short-period comet that now bears his name. After a brief spell at Pulkova Observatory in Russia, under Otto Wilhelm Struve (1819–1905) (Otto Struve's grandfather), he joined the staff of Milan's Brera Observatory in 1860 and became its director two years later. The small instruments at Brera led Schiaparelli to focus his research initially on meteors and comets. Indeed, probably his most important contribution to astronomy was his discovery that swarms of meteors, which give rise to annual showers on Earth, and comets follow similar paths through space. His reward for this breakthrough was the installation of a more powerful (8.6-in) refractor at Brera which allowed him to engage in serious planetary work. He first wanted to test the powers of the new instrument, to see if it "possessed the necessary optical qualities to allow for the study of the surfaces of the planets." 1877 brought the ideal opportunity in the form a particularly favorable opposition of Mars. Schiaparelli prepared for it almost like a prize fighter, avoiding "everything which could affect the nervous system, from narcotics to alcohol, and especially ... coffee, which I found to be exceedingly prejudicial to the accuracy of observation."

What emerged from Schiaparelli's long hours at the eyepiece in Sep 1877 was the most (optimistically) detailed map of Mars ever published. With the additional features he filled in over the next decade, it became a standard reference in planetary cartography, still in use until the dawn of the space probe era, and the scheme he devised for naming major Martian features survives to this day. He used Latin and Mediterranean place names taken from ancient history, mythology, and the Bible. A light spot in the southern hemisphere, for example, he called Nix Olympia – the Snows of Olympus (now known to be the largest volcano in the solar system and rechristened Olympus Mons). The great triangular feature, first observed by Huygens in 1669, became Syrtis Major, while large, bright patches earned the picturesque labels of Elysium, Cydonia, Tharsis, and Thyle. What was most striking about Schiaparelli's original map, however, was a curious network of linear markings which crisscrossed the Martian surface and joined one dark area to another. These lines he referred to as canali and he named them after famous rivers, both fictional and real – Gehon, Hiddekel, and Phison from the rivers in the Garden of Eden, Lethes and Nepenthes from the underground realm of Hades, and Ganges, Euphrates, and Nilus from actual geography.

Schiaparelli insisted that his nomenclature was not intended to prejudge the nature of the features he saw on the Martian surface:

[T]hese names may be regarded as a mere artifice... After all, we speak in a similar way of the seas of the Moon, knowing very well that they do not consist of liquid masses.

However, the romantic and evocative names he chose would prove to have a powerful influence over some of his contemporaries. Moreover, Schiaparelli himself clearly favored a maritime view of Mars in which the dark areas were seas and the brighter regions land.

During the opposition of 1879, Schiaparelli refined his original map, noting some changes such as the apparent invasion of a bright area known as Libya by Syrtis Major. This encouraged him in his belief that Syrtis Major was a shallow sea which at times flooded the lands around. He drew in more canals and for the first time reported what he called a 'gemination', or doubling of one of these features. Of the reality of the canali, if not their exact nature, he was utterly convinced: "It is [as] impossible to doubt their existence as that of the Rhine on the surface of the Earth."

So began the great canal controversy. Were the canali real? And if so, what were they? In an influential 1893 article, Schiaparelli maintained that Mars is a planet of seasonal change, with a temporary sea forming around the northern polar cap as it melted each spring. In support of his belief in a Martian atmosphere rich in water vapor he pointed to the spectroscopic observations of Hermann Vogel. The canals, he asserted, comprised "a true hydrographic system" and perhaps "the principal mechanism ... by which water (and with it organic life) may be diffused over the arid surface of the planet." As to their origin, he leaned toward a natural explanation:

[W]e are inclined to believe them to be produced by an evolution of the planet, just as on the Earth we have the English Channel and the Channel of Mozambique.

However, he did not rule out the possibility that they might be artificial:

Their singular aspect, and their being drawn with absolute geometrical precision, as if they were the work of rule or compass, has led some to see in them the work of intelligent beings... I am very careful not to combat this supposition, which includes nothing impossible.

Cautious and unflambouyant though he was – in sharp contrast to Percival Lowell – Schiaparelli nevertheless seems to have been biased in his Martian studies by a underlying desire to prove the habitability (if not the actual habitation) of other worlds in the solar system. This willingness to see what was often not there is also suggested by his observations of Mercury. From these, Schiaparelli deduced that Mercury spins on its axis once every 88 days, the same time it takes to go around its orbit (see gravitational lock), so that it must always keep one face toward the Sun. Furthermore, he claimed that Mercury shows librations of 47° that is, it rocks back and forth considerably, so that there is a broad, temperate "twilight" zone between perpetual day and perpetual night. Only such an arrangement, Schiaparelli presumably realized, together with a Mercurian atmosphere (in which he also believed), would provide a tolerable environment for life.