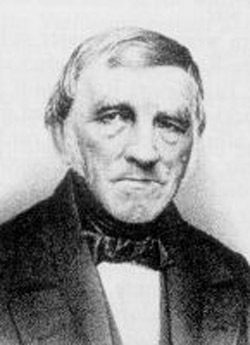 Johann Encke was a German astronomer and mathematician who calculated the orbit of a short-period comet, now named after him (see Encke's Comet), and also has a division between the A- and F-ring of Saturn, discovered in 1838, named in his honor. In 1811, Encke began his study of mathematics at Göttingen under Carl Gauss. In 1816 he moved to the Seeberg Observatory, Switzerland, to work as an observer and, in 1822, was appointed its director. In 1825 he was invited to become director of the Berlin Observatory and in 1844 he took up a professorship at the University of Berlin. He is best known for figuring out, at the suggestion of Jean Pons, the orbital elements of a comet found by Pons in 1818. Pons suspected that one of the three comets discovered in 1818 had already been discovered by Encke in 1805. This comet was found to have a period of 3.3 years and Encke predicted its return for 1822. In 1846 Johann Galle discovered Neptune with the help of star charts edited by Encke.