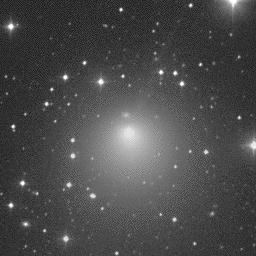 Encke's Comet photographed by Jim Scotti on Jan 5, 1994, using the 0.91-meter Spacewatch Telescope on Kitt Peak. The image is 9.18 arcmin square with north on the right and east at top. The integration time is 150 sec.

Encke's Comet is a small, relatively inactive comet with the shortest period – just over three years – and the smallest aphelion of any known comet. It has been observed at every apparition since its discovery in 1819. Named after Johann Encke, who computed its orbit, it is the parent body of the Taurids meteor shower.