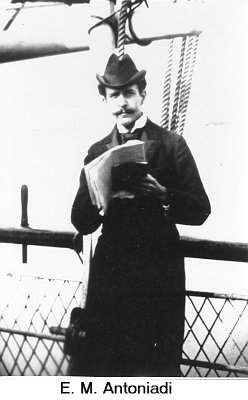 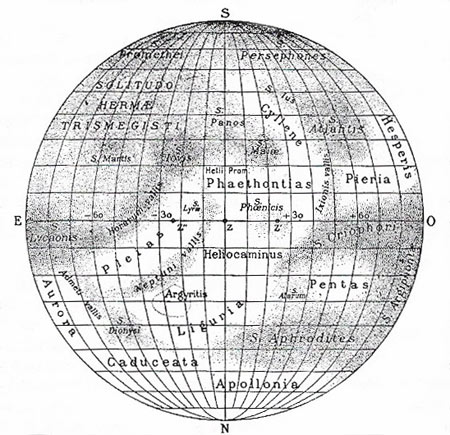 This map of Mercury was drawn between 1924 and 1933 by Antoniadi, who named the main features. There is very little poor correlation between the dark areas shown and images returned by space probes that have flown by or orbited Mercury.

Eugène Antoniadi was a Turkish-born astronomer, of Greek descent, who spent most of his life in France and became a leading observer and map-maker of the planet Mars and decisive critic of the canal hypothesis of Mars. Earlier in his career, Antoniadi worked at Flammarion's observatory at Juvisy and claimed to have seen martian canals.

In 1898 he put forward a geological explanation for some of the markings while others he argued were the boundaries of shaded areas. As late as 1903, he maintained the "incontestable reality" of the canal phenomenon. So great had become his reputation as an observer that by the 1909 opposition of Mars he was given access to the largest telescope in Europe, the 83-cm (33-in) refractor at the Meudon Observatory. With this instrument, he claimed he was able to resolve the canals into streaks or borders of darker regions and concluded: "The geometrical canal network is an optical illusion; and in its place the great refractor shows myriads of marbled and checkered objective fields ..." Quickly, observers in the United States, including George Hale, confirmed Antoniadi's opinion and worldwide belief in the canal hypothesis went into rapid decline. In his magnum opus, La Planète Mars (1930),1 he presented a state-of-the-art summary of martian topography and helped set the scene for the modern investigation of the planet.

Antoniadi was also a regular observer of the inner planets, Mercury and Venus, and his La Planète Mercure et la Rotation des Satellites (Paris, 1934) was the only work on this subject for two decades. In it, he published the most detailed pre-Space Age map of Mercury based on the assumption, first made by Schiaparelli, that the planet always keeps the same face toward the Sun – an assumption now known to be false. Antoniadi claimed to have seen local obscurations which he thought were due to material suspended in a thin Mercurian atmosphere.2