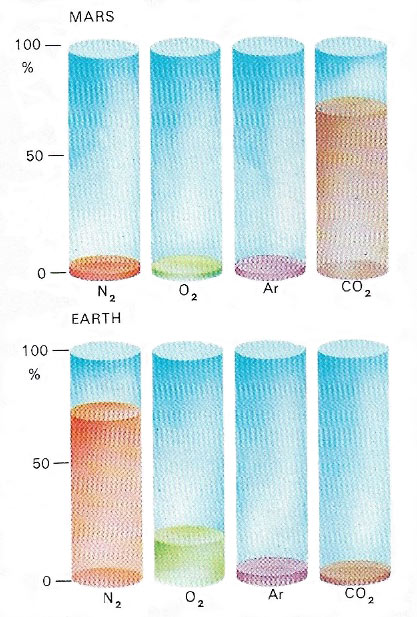 Fig 1. The main constituents of the martian atmosphere are here compared with those of Earth's atmosphere. 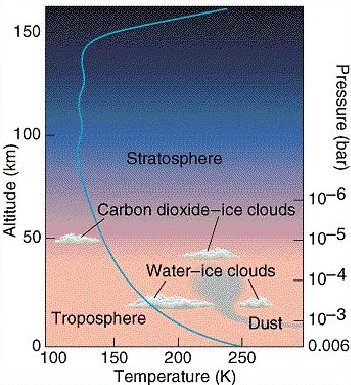 Fig 2. How temperature and pressure of the martian atmosphere vary with altitude. 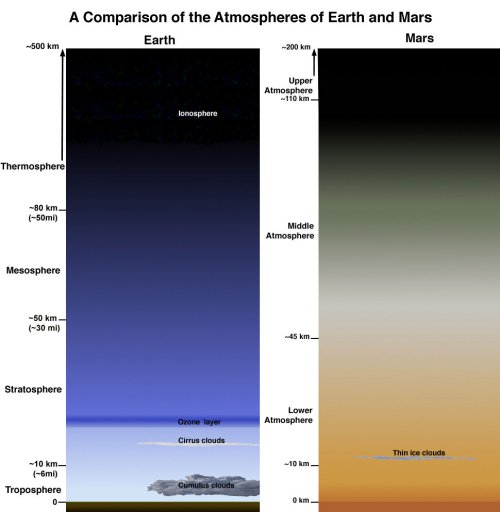 Fig 3. Comparison of the atmospheres of Earth and Mars.

Mars also has a lot of dust in its atmosphere, and winds occasionally create large dust storms. Dust devils, which are like miniature tornadoes are very common and have been photographed by spacecraft on the surface.


Viking and the first accurate measurements

Measurements made in 1976 by the Viking landers established the exact composition of the atmosphere on Mars as 95.3% carbon dioxide, 2.7% nitrogen, and 1.6% argon, with smaller amounts of oxygen (0.15%) and water vapor (0.03%). The average surface pressure is only about 7 millibars (less than 1% of the Earth's), though it varies greatly with altitude from about 9 mb in the deepest basins to about 1 millibar at the top of Olympus Mons, the highest point on Mars. This is still thick enough to support strong winds and enable occasional planet-wide dust storms to obscure the surface for months at a time. On the other hand, the martian atmosphere results in only a weak greenhouse effect that raises the surface temperature by about 5&#176C over what it would be without any atmosphere at all. Consequently, most of Mars is well below the freezing point of water for most of the year. Even when the daytime temperature at low latitudes does climb significantly above freezing, the atmospheric pressure is so low that water ice turns directly into water vapor without first becoming liquid. Of great significance is the recent detection of trace amounts of methane and possibly also of ammonia, which could indicate the presence of life on Mars, although there are other ways of explaining these gases.


methane (and life?) on Mars

In Mar 2004, small quantities of methane (about 10 parts in a thousand million) were detected in the martian atmosphere by researchers operating the Planetary Fourier Spectrometer (FPS) experiment on the orbiting Mars Express spacecraft and also by astronomers using the Keck Telescopes and the Canada-France-Hawaii Telescope on Earth. This discovery is very interesting because methane is expected to be destroyed by the action of sunlight on a timescale of just a few hundred years. Its presence therefore can only be explained if there is some process on Mars that is continually creating it.

Two main theories stood out which might explain the Mars methane: volcanic activity or the action of methanogens (bacteria that give off methane) in the martian soil. However, in 2005, results of a study carried out by Vladimir Krasnopolsky using NASA's Infrared Telescope Facility were published that found no trace in the Mars atmosphere of sulfur dioxide. This gas is given out in copious amounts by volcanoes on Earth and ought to be present on Mars if there had been any substantial volcanic activity there over the past few centuries. Its absence casts doubt on the volcano theory of the martian methane and boosts the biological explanation. However, other ways of explaining the presence of methane on Mars remain. Perhaps heat diffusing from buried magma is driving reactions between underground moisture and minerals, producing methane but no sulfur dioxide. These hydrological processes are thought to occur 10 km below the martian surface. According to this idea, the underground water and rock reactions would produce hydrogen, which would combine with carbon or carbon dioxide in crustal pores to produce methane.

The present situation is that a biogenic source for the Mars methane is a distinct possibility but scientists are keen to eliminate first every other possibility.

In Jul 2004, came announcements from the same Mars Express investigators that they had found trace amounts of ammonia in the martian atmosphere. If confirmed this would be even more significant because this gas can survive for only a few hours. See also methane on Mars and ammonia on Mars.


water vapor and hydrogen on Mars

The comparatively large amount of carbon dioxide in the martian atmosphere – 9 times more overall than is contained in Earth's much thicker atmosphere – led astronomers to conclude more than three decades ago that the martian atmosphere should contain small amounts of water vapor and hydrogen. Why? Because the carbon dioxide would be split by solar radiation into carbon monoxide and oxygen; water vapor must be present, the theory went, to trigger chemical reactions that recombine the carbon monoxide and oxygen to make carbon dioxide and thus complete the cycle. As part of this process, hydrogen molecules would be created. Water vapor was found on Mars by Viking in the 1970s, but the molecular hydrogen was only detected as recently as 2001 by Vladimir A. Krasnopolsky of the Catholic University of America and Paul D. Feldman of Johns Hopkins University, using NASA's Far Ultraviolet Spectroscopic Explorer (FUSE) spacecraft.


earlier observations of the martian atmosphere

William Herschel offered the first scientific evidence that Mars might have an atmosphere. His observations of the planet in 1783 led him to suppose that some changes he had noted were due to "clouds and vapors."1 Four years later, Johann Schröter arrived at the same conclusion:2

The spots and streaks on the surface of Mars are always changing, even from hour to hour. But that they are the same regions is shown by the fact that the same shapes and positions develop and pass away again, as one would expect of the variable atmospheric appearances occurring above a solid surface.

These early results were disputed at the start of the next major phase of martian observations which was ushered in by the great map-makers Wilhelm Beer and Johann Mädler and made possible by the construction of larger, better refracting telescopes. By 1830, Beer and Mädler had concluded that: "The hypothesis, that the spots are similar to our clouds, appears to be entirely disproved." Yet the notion of an atmosphere rich in water vapor did not go away. In 1870, Richard Proctor was still advocating the Herschelian view and, from it, extrapolating to martian seas and life:

[I]f we admit that the vaporous envelope which occasionally hides parts of Mars is aqueous, we must believe in the existence of aqueous oceans on Mars ... the Martial lands are nourished by refreshing rainfalls; and who can doubt that they are thus nourished for the same purpose as our own fields and forests – namely, that vegetation of all sorts grow abundantly?

The final decade of the 19th century saw the rise of the canal controversy (see canals of Mars) but, at the same time, serious doubts being cast by William Campbell that the martian atmosphere was either substantial or contained water vapor. At the opposition of 1909, contradictory results came from Campbell, who reconfirmed his failure to find water vapor on Mars, and Vesto Slipher and Frank Very who claimed a positive result. In any event, concluded Campbell:3

... these measurements do not prove that life does not or cannot exist on Mars. The question of life under these conditions is the biologist's problem rather than the astronomer's.

Lowell's 1908 estimate, based on albedo measurements, of a surface pressure on Mars of 87 mb (0.087 of Earth's barometric pressure) roughly agreed with those of later, pre-Space Age investigators, such as de Vaucouleurs. However, the composition of the atmosphere remained controversial. Spectroscopic studies by Walter Adams and Theodore Dunham in the 1930s found no trace of either water vapor or oxygen. In fact, the first substance to be positively identified in the martian atmosphere was carbon dioxide. Observing from the McDonald Observatory, Gerard Kuiper found that there was about twice the concentration of this gas on Mars as there is on Earth. By analogy with Earth, it was assumed that the bulk of the martian atmosphere was made up of nitrogen – a gas notoriously difficult to detect with a spectroscope. In 1950, the best guess as to the composition of the martian atmosphere was made by de Vaucouleurs: 98.5% nitrogen, 1.2% argon, 0.25% carbon dioxide, and less than 0.1% oxygen. But in fact, as we now know, there is very little nitrogen on Mars and the atmospheric pressure is therefore much lower than astronomers had estimated before the exploration of the planet by space probes.

1. Herschel, W., "On the Remarkable Appearances at the Polar Regions of the Planet Mars, the Inclination of its Axis, the Position of its Poles, and its spheroidal Figure; with a few Hints relating to its real Diameter and Atmosphere." Philosophical Transactions of the Royal Society of London, 74, 233 (1784).
2. Schroter, J. H. Areographisiche Beitrage zur genauren Kenntnis und Beurtheilung des Planeten Mars. H. G. van de Sande Bakhuyzen, ed., Leiden (1881).
3. Campbell, W. W. "Water Vapor in the Atmosphere of Mars." Science, 30, 474 (1909).