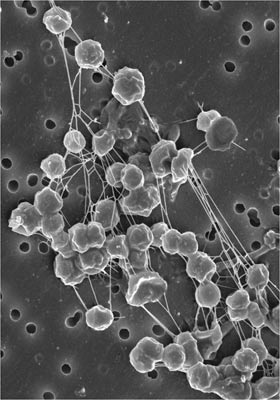 A methanogen is a microorganism that produces methane as a by-product of its metabolism. All known methanogens are both archaeans and obligate anaerobes, that is, they cannot live in the presence of oxygen. They are commonly found in wetlands, where they generate methane in the form of marsh gas, and in the guts of animals such as ruminants and humans, where they are responsible for flatulence.

More than 50 species of methanogens have been identified, including a number that are extremophiles. Live methanogens were recovered from a core sample taken from 3 km under Greenland by researchers from the University of California, Berkeley. Another study discovered methanogens in soil and vapor samples from the vicinity of the Mars Desert Research Station in Utah. These findings add weigh to speculation by some scientists that methanogens may be responsible for the methane that has been in detected in the atmosphere of Mars.