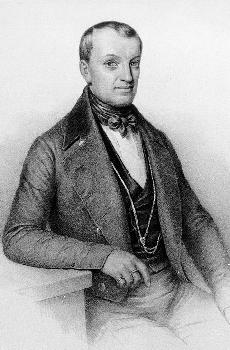 Johann Mädler was a German astronomer who, with Wilhelm Beer, published the most complete contemporary map of the Moon – the four-volume Mappa Selenographica (1834–1836). It was the first lunar map to be divided into quadrants and it remained the standard until Julius Schmidt's map of 1878. Beer and Mädler also produced the first systematic map of Mars. In 1840 Mädler left his Berlin home to become director of the Dorpat Observatory in Estonia. He formed the curious idea that Alcyone (Eta Tauri) was the star lying at the center of the Galaxy.